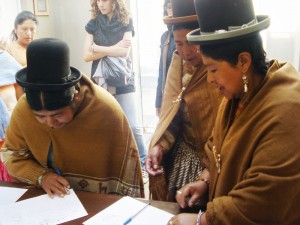 On 14 May, Bolivia's Legislative Assembly finally gave the green light to the Law against Harassment and Political Violence against Women, a ground-breaking law to protect women and their political participation. It responds to an urgent need: in the past eight years Bolivian police have received more than 4,000 complaints of harassment from women participating in politics; many more incidents are likely to have gone unreported.

“Women from different organizations have demanded loudly for this law to be approved and implemented, says Caty Cauna, a councilor in Coroico city, and president of the Association of Councilors in La Paz (ACOLAPAZ). “The authorities must now ensure compliance with this legislation so that society learns not to violate the rights of those elected by the people.

The new law provides a two to five year prison sentence for anyone who pressurizes, persecutes, harasses or threatens an elected woman or those exercising public functions. The penalty for practicing physical, psychological or sexual aggression is three to eight years in prison.

The law was passed following extensive advocacy by women's groups, particularly the national women's network Coordinadora de la Mujer which has been supported by UN Women's Fund for Gender Equality since 2010.

The law will allow women to access decision-making spaces better in a country where women's participation in politics has increased significantly in recent years; 35 per cent of ministers are women, while they make up 23 per cent of deputies in 2009 and 44 per cent of senators. “We have broken the glass ceiling for women's political participation, although the parity is higher in some organs than in others, says Monica Novillo, from the Coordinadora de la Mujer.

The challenge for law makers now will be ensuring that the law is implemented systematically and effectively. Outreach and dissemination to the public with be key in this task, while also coordinating with the judiciary to ensure that sanctions are implemented.