Closing the science and technology gender gap in the Dominican Republic 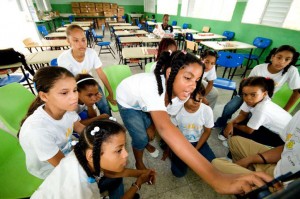 Girls participating in the project Gender and ICTs: Equality and Equity in E-Dominican, in the Dominican Republic. Photo credit: Lorena Espinoza Peña

According to a study by the Research Center for Women's Action (CIPAF), about 80 per cent of teachers in the Dominican Republic believe that boys excel in mathematics while girls do better in languages. But the facts speak to a different reality:

“We compared these results with real data and found out that it was not true: girls had got better grades in math," says Magaly Pineda, Executive Director of CIPAF.

Overcoming stereotypes, promoting interest in mathematics among girls, and eventually reducing the gender digital divide in the Dominican Republic is the objective of the project Gender and ICTs: Equality andEquity in E-Dominican, organized by the CIPAF and supported by the UN Women's Fund for Gender Equality.

Women represent 61 per cent of the university population in the Dominican Republic and yet, barely 11 per cent of these students are studying for careers in science and technology. The figures on household trends also show a gap in the opportunities that men and women have to access digital technology: only 38 per cent of households headed by women have access to Information and Communication Technologies (ICTs).

The digital divide remains difficult to close. While more women are entering universities, women are generally still absent from key areas of the economy.

“The ICT sector is the fastest growing in the country, but women represent only 33 per cent of the labor market and most of them in support tasks," says Magaly Pineda.

To address this reality, math clubs such as “E-girls" and “Super matic" have been created under the umbrella of the Gender and ICTs project. The aim is to promote science subjects amongst girls in public schools. The initiative includes mentoring and career guidance campaigns to speed up the entry of more women into the Technological Institute of the Americas (ITLA) and technology careers.