In cities like Rio de Janeiro, where 17 women are raped every day and 89 per cent of people have a cell phone, UN Women is utilizing mobile phone technology to help women identify, report and ultimately prevent violence in urban public spaces. On the concluding day of the 2013 Second Regular Session of the UN Women Executive Board, Member States were briefed on how UN Women is harnessing Information and Communication Technologies (ICT) to empower women and transform lives. 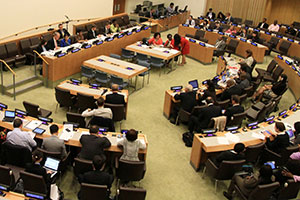 The Executive Director of UN Women laid out her vision for the organization at the Second Regular Session of the Executive Board on 16 September. Photo: UN Women

Nadine Gasman, UN Women Representative in Brazil, described how women’s safety audits are being conducted in Rio de Janeiro through the use of smartphone apps to produce evidence on violence against women and girls in public places. The information is then geographically mapped to enable the prevention of further incidents. At least 300 people have been trained on how to identify and address gender-based violence and 10 maps have been developed for communities in the city.

“Can we make greater use of technology for development and for the empowerment of women? I think we can,” said UN Women Executive Director Phumzile Mlambo-Ngcuka during her opening statement on 16 September.

During the briefing on 18 September, the Executive Director said that while technology grants amazing access to all, in many cases, marginalized segments of society are often limited to owning technology, but not necessarily in a way that can change their lives. In this regard, she noted that it is inspiring to see how UN Women ICT-based strategies are being used effectively.

Another presentation from Bangalore, India, showcased how ICT is helping connect elected women to their grassroots constituents and hold their local governments accountable. With the message of ‘Making Women Voices and Votes Count,’ UN Women has partnered with the NGOs IT for Change, Kutch Mahila Vikas Sangathan and Area Networking and Development Initiatives to create a platform for marginalized women to interact with elected women. This is accompanied by periodic meetings in women-only public forums at the village-level, and infocentres and community radio programmes to increase awareness about citizenship rights.

Executive Board members were also given a sneak peek into UN Women’s new and innovative knowledge hub on gender equality and women’s economic empowerment. The Manager of the Knowledge Gateway, Anna Falth, said it is a concrete example of how to use ICT to promote women’s empowerment. A joint initiative with the Government of Canada, the Gateway is a one-stop platform to both connect and engage users on all aspects that impact women’s economic lives. Providing opportunities to network and access global expertise on data, policy and other specific areas such as environment, it will also enable women entrepreneurs, workers and farmers to both access and add their own resources.

In addition to the ICT briefing, the three-day Executive Board session concluded with the adoption of the Strategic Plan for 2014-2017 and the Integrated Budget for 2014-2015, two critical reports for the organization’s future direction.

The need to mainstream the women’s agenda also figured prominently throughout the discussions, with Member States supporting the inclusion of a strong gender perspective in the post-2015 development agenda. Delegations welcomed the vision of the Executive Director, who stressed the need to work in an inclusive and collaborative manner, as well as her emphasis on education, economic empowerment, poverty eradication, humanitarian assistance and disaster risk-reduction.

Noting that high impact can only be achieved with sufficient resources, both the Executive Director and the President of the Board H.E. Mr. Normans Penke (Latvia) called upon Member States to ensure that UN Women has the resources needed to fulfill its mandate.

Related News
01/07/2013
The gender dimension of the Millennium Development Goals Report 2013
06/07/2020
Op-ed: The role of digitalization in the Decade of Action
22/05/2018
In the words of Nandini Chami: "The conversation on ICTs needs to move beyond just accessibility"
19/07/2016
Hacking to combat sexual harassment in Philippines
09/11/2014
In India, UN Women Executive Director hears from rural tech gurus
END_OF_DOCUMENT_TOKEN_TO_BE_REPLACED