UN-Habitat studies show that women in urban areas are twice as likely as men to suffer some form of violence, especially in developing countries.[1] Violence is a daily reality that disproportionately affects women and girls in the poorest districts of any city. Owing to their poverty, survivors among these populations have less access to support services, or they simply do not have the necessary information.

In Brazil, sexual violence is a problem. Although reported cases reflect only a fraction of actual occurrences, data from the Rio de Janeiro State Secretariat for Public Security in 2012 show that compared to 2011, there was a sharp 23.8 per cent increase in cases of estupro (crimes which include rape and other violence) reported to the police in Rio de Janeiro.[2] 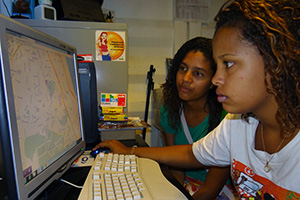 At the Educap NGO, dedicated to education and prevention in the Complexo do Alemão favela in Rio de Janeiro, Wayne Cristine Felix de Souza (left) and Lorena Ferreira Costa (right) check out the website developed under the “Rio for Women” programme. Photo: UN Women/Gisele Netto

In recent years, the Brazilian Government has invested heavily in mobile telephone networks and in broadband. “LAN houses” (establishments offering public Internet access) have also become popular across the country,[3] including in the favelas.[4]

Leveraging this wider access to technology, on International Women’s Day, 8 March 2013, UN Women, UNICEF and UN-Habitat launched an online website which also works as a smartphone app that brings together information on support services for women and girls who are survivors of violence.

“The objective is for the tool to be used by women and girls. Even if they are familiar with the Maria da Penha Law, which is the Brazilian law against gender-based violence, they don’t know exactly where to go to get help, which service to request or where to get more information about their rights,” explains Rebecca Tavares, UN Women Representative in Brazil.

With a large part of the population using mobile technology and computers in the favelas,[5] the online tool was created so that anyone with a smartphone or computer and Internet access can use it to get information about assistance and services for survivors of violence. It provides abuse hotline numbers, information about rights, as well as the responsibilities and locations of Specialized Women’s Attention Centres, which provide psychological, social and even legal support. The tool also details steps to take after being raped, along with geographical positioning systems so users can locate the closest women’s centre, police station, medical centre and public prosecutor’s office.

At the same time, young women leaders in various marginalized communities are being trained by the NGO Cedaps (Health Promotion Centre, in Portuguese) to teach their peers about the website/app, and how to identify and address gender-based violence.

They are also using smartphones to take photos and videos of safety risks such as faulty infrastructure, obscured walking routes and lack of lighting, in order to create interactive digital maps of the favelas, which are being shared with local authorities and used to develop targeted interventions. 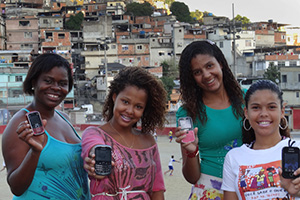 Nubia Felix (right) is one of the project’s community trainers in the favela of Complexo do Alemão. Photo: UN Women/Gisele Netto

“There is a lot of violence here and women are frightened to take action,” says Nubia Felix de Jesus, aged 18. She is one of 25 young women in the favela of Complexo do Alemão who are being trained as community trainers in the use of the online tool in 10 favelas.

In most of Rio de Janeiro’s favelas, there is a lack of basic public security services and urban planning. Since the mid-1970s and early-1980s, the void has been filled by large organized crime factions involved in disputes over drug trafficking. Women, youth and children, especially girls, face particular risks in this context. They are victims of abuse that ranges from harassment to sexual assault and rape. This daily reality restricts their freedom to participate in education, work, political and economic life.

“Many women are economically dependent on their husbands. They do not work and are afraid for their children. So they put up with it,” Nubia explains. “I want to keep learning so that I can help these women, and tell them exactly where they can find help.”

Safe Cities and the favelas

Globally, UN Women’s Safe Cities initiatives are active in nearly 20 capital cities. Implemented along with UN agencies UNICEF and UN-Habitat and many other partners at a national and local level, they are engaging municipal leaders, as well as women’s, men’s and youth organizations to ensure that women, youth and children can enjoy public spaces without fear of violence.

Launched in June 2011 as part of the Safe Cities initiative, the “Safe and Sustainable Cities for All” Joint Programme is a five-year endeavour in eight cities, including Rio de Janeiro. It seeks to increase safety, prevent and reduce violence, including sexual violence and harassment, and mobilize and empower women’s groups, youth and children’s advocates to shape their urban environment.

The “Safe and Sustainable Cities for All” programme is locally called Rio por Ellas, (Rio for Women). It was set up in 10 of Rio de Janeiro’s favelas: Batan, Prazeres, Cidade de Deus, Cantagalo/Pavão/Pavãozinho, Borel, Macacos, Complexo do Alemão, Salgueiro, Rocinha and Andaraí – which have undergone the government’s so-called “pacification” process.

In 2008, the Rio de Janeiro State Secretariat for Public Security undertook an initiative establishing Police Pacification Units (Unidades de Policía Pacificadora)[6], to prevent drug trafficking, gang violence and to also address the epidemic of violence against women and girls in the favelas.

In 2012, the Safe Cities programme started off with surveys involving women, men and youth residents of the ten favelas. One of the unanimous responses was that people said they did not know about the network of support services for victims of violence. They did not know who to ask, what organizations exist to help, what course of action victims should take, or what support should be given in each case in terms of health, security, justice or psychological support.

According to Rayne Ferretti, UN-Habitat Programme Coordinator in Brazil, the lack of information was common to all the communities studied. “That’s why the app could be a great public service.”

The lack of awareness was what led to the smartphone/online tool, which will facilitate access for women and girls who are victims of violence to the information and support services available through the Network for Tackling Violence against Women in the city of Rio de Janeiro.

“Every girl, every woman has the right to live without violence. But when violence occurs, we have to ensure that she finds the necessary support and services to deal with the situation and protect herself so that it doesn’t happen again,” says Luciana Phebo, UNICEF Coordinator in Rio de Janeiro.

Hope in Complexo do Alemão

Little more than two months after it was created, the project is still in its infancy. Nevertheless, in places where social services have very little presence, results are evident. 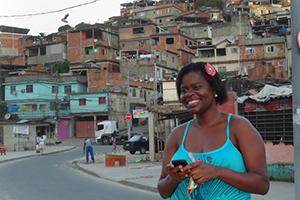 “A local woman accessed the site, she found the nearest Specialized Women’s Police Station, and she reported her husband who was beating her,” says Kelly Gregorio da Silva, aged 29, another community leader in the Complexo do Alemão favela. “She went back to live with him; she didn’t leave him … but she had the courage to report him. She knew where to go and he had to answer to the police.”

To build on this tool, UN Women and partners have initiated a new collaboration with Microsoft which will help to assess how this and other safety apps are actually used by women and girls in shantytowns, and access to services can be further improved. Along with Rio de Janeiro, other cities participating in this project include New Delhi and Marrakesh.

María da Penha Law, a name to change a society

Speech by Michelle Bachelet: Reclaiming Public Spaces for the Empowerment of Women and Girls

Watch an information video about the app (in Portuguese): https://www.youtube.com/watch?v=mx4F4cLG0kQ

[3] Brazil has over 100,000 public Internet access centres, otherwise known as LAN (Local Area Network) Houses. According to a 2012 study on Internet access by Brazil’s Internet regulator, 57 per cent of poor children aged 9-16 use public places such as LAN houses or cybercafés, versus only 15 per cent of upper-class respondents (page 269).

[4] Favelas are poor and unregulated urban settlements, many of them in the heart of tourist areas. They are shantytowns built without permission or official registration. There is a partial or total lack of a State-provided sanitation, electricity, telephone network or running water. It is estimated that, in Rio de Janeiro, there are more than 1.7 million people living in just one of the city’s 968 favelas.

[5] A 2013 study reveals that in favelas across the country, 89 per cent of households have a cell phone and 31 per cent have a computer with Internet at home (complemented by computer access in schools and LAN houses).

[6] The Government plan established community police in poor neighbourhoods and favelas, especially in the state capital. It aims to break up the drug trafficking gangs that controlled these areas as if they were actually parallel states. Today, there are 33 UPPs established in the most well-known and central favelas of Rio de Janeiro.