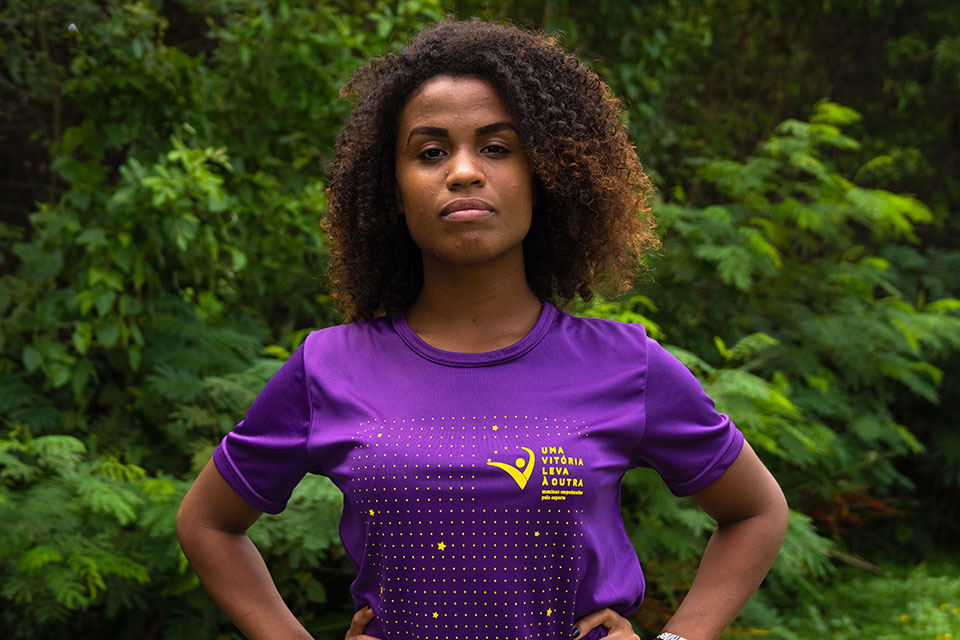 Hingride Marcelle Leite de Jesus is a 20-year-old graduate of the One Win Leads to Another programme in Brazil. Photo: UN Women/Camille Miranda

I grew up in a family led by women, who made their own decisions, took care of their children and provided for themselves. All the men abandoned their wives and children. While this reflected the sexist culture, it also gave me powerful female role models at home.

I remember when my father used to live with us, my mother wasn’t allowed to take up certain kinds of jobs that he considered masculine. When I started playing rugby, he said I shouldn’t do it, because it was something made for men. It made me realize that a woman playing rugby can change people’s mind about what we are able to do. Through rugby, I learned to make choices, to understand what I should focus on and what I had to let go, to respect my limits and to express myself more effectively.

The importance of safe spaces for women and girls

Today I use every opportunity I get to talk to my mother and my aunties about women’s rights, because they didn’t have the same kind of education that I had. I also talk to my younger cousins, because I want them to be able to fight for themselves.

As women, we lack spaces where we can talk about our issues, ask questions and express our opinions. This is what I appreciate the most about the One Win Leads to Another programme—the creation of safe spaces for girls.

I joined the programme to keep playing rugby. But then I realized how important it was to go to their weekly sessions and talk with other girls from various backgrounds about our bodies, about gender, race, sexuality, and about violence. Thanks to that safe space, I could share things I never had the courage to tell anyone before.

“Sport opens up spaces for women and girls.”

I am black, poor and live in the periphery. That doesn’t mean I can’t achieve my goals and realize my dreams! I just completed the training of trainers to become a facilitator and work with younger girls in my community. This will be more than a job, a source of income for myself and my two-year-old boy. It will be an opportunity for me to become an example for other girls in my community. They will look at me and think: if she made it, I can make it too.

The power of sport

It is important that the whole society is concerned about gender relations and strives for equality, so that women and girls can achieve their goals without [constant] obstacles and discrimination.

Sport opens up spaces for women and girls. In addition to the physical and psychological benefits, sport is a tool for self-empowerment and empowerment of other women. For far too long, we were kept away from sporting opportunities, and there is an important role that the media can play, especially sport media, in showing that any sport is a woman’s place.

Hingride Marcelle Leite de Jesus is a 20-year-old graduate of One Win Leads to Another, a joint programme between UN Women and the International Olympic Committee, which provides weekly sport practice and life skills sessions for adolescent girls in Brazil. She recently met with the football player Marta Vieira da Silva, UN Women Goodwill Ambassador, and participated in a Carnival parade in Rio de Janeiro, Brazil.

Related News
25/07/2016
From where I stand: Micaele Fernandes
06/06/2013
In Rio de Janeiro's favelas, a new online tool tackles violence against women and girls
06/04/2020
She persists: Sport is a tool for empowering girls in Brazil
25/02/2020
Marta Vieira da Silva and One Win Leads to Another girls celebrate women’s empowerment in Brazil Carnival
08/10/2018
Sport paves the way for skills and jobs for young mothers in Brazil
END_OF_DOCUMENT_TOKEN_TO_BE_REPLACED