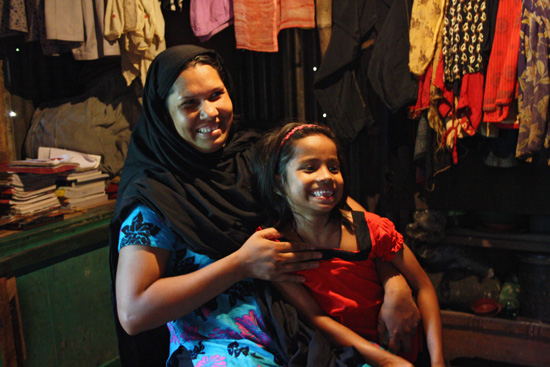 Pakhi Begum left Bangladesh for Dubai to work as a maid, only to find that her recruiter had sold her into domestic servitude. After months of hard labour and abuse she fell ill and was sent back to Bangladesh without being paid. UN Women has been working to protect the rights of women migrant workers in Bangladesh since 2005, partnering with government ministries. When the government established the country's first resource centre for migrant workers in 2009, UN Women ensured that it would provide women like Pakhi with easier access to information about safe migration.

As a teenager Najma traveled to Abu Dhabi for a domestic-help position and was immediately trafficked into commercial sex work. She managed to escape back to Bangladesh after a year of forced prostitution, exploitation and abuse. Now 25, Najma is part of a rehabilitation programme supported by UN Women. Operated with government and NGO partners, the programme re-integrates exploited migrants into their communities.

To escape an abusive marriage Abeeda Begum sold all her belongings and gave the proceeds to an agent to arrange for a visa, a flight, and domestic work abroad. Yet on her arrival in Abu Dhabi she was detained at the airport by immigration officers. The visa was fake. Now back in Bangladesh, Abeeda is employed as a janitor in an office, but also counsels women who hope to work abroad. Working with a UN Women partner, she regularly holds courtyard meetings to raise awareness on safe migration, and advises women on verifying their visas, tickets and work permits.

According to government sources, the number of Bangladeshi women migrant workers in 2011 totaled approximately 30,500, and their remittances totaled US$ 11.1 billion. Those earnings account for roughly 13 per cent of the country's GDP.

Among the districts' activities were a roundtable discussion with local stakeholders on ways to combat the violence faced by women migrant workers, the creation of a day-long information centre, and a rally like this one in Faridpur.

In Rajshahi district, men and women marched under the slogan “Safe Migration, Economic Development, as part of a government awareness-raising campaign on the prevention and protection of women migrant workers from violence.

UN Women uses a three tier approach to support Bangladeshi women through the migration cycle. They empower the women with comprehensive information, resources and training; sensitize labour attachés in embassies and government officials in receiving countries to the needs of migrant women; and help rehabilitate women who return to Bangladesh. Its other activities have included the national broadcasting of a 26-episode radio programme in local dialects. The programme, produced by UN Women, focused on the safest ways to migrate for work, and was contacted by aspiring women migrants seeking information.