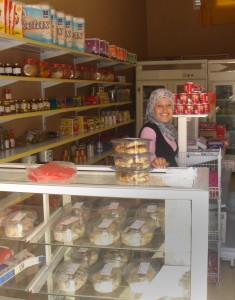 Khitam Sameeh, head of the Baita Cooperative, sells the group's goods and products in its first shop, which was established with support from the UN Women's Fund for Gender Equality. Photo credit: Bisan Center for Research and Development

As a young girl, Khitam Sameeh dreamed of finishing high school in the Occupied Palestinian Territories (oPt) and staking out a career path. Instead, an early arranged marriage at 15 left her raising five children, with few options for easing a daily economic struggle. She was not alone: according to the Palestinian Central Bureau of Statistics in 2011, 92.3 per cent of women aged 15 to 29 years-old are married.

Yet in spite of the challenges, Khitam has achieved her goal. At age 42, she emerged from a women's cooperative programme last year with a new set of skills, a blossoming monthly income and fresh confidence in her abilities.

“The project has greatly affected my personality, she explains. “I am now a productive woman! My profits reached 1,430 Israeli shekels last year (US$353), and this has allowed me to prove myself in my home, cooperative society and community.

Women experience particular disadvantage in the occupied territories, where already-protective traditional attitudes are intensified by other daily restrictions. Male education is commonly prioritized, much of the limited paid work goes to men, and women are largely expected to live in the private sphere, focused on unpaid domestic tasks. Although the female literacy rate has improved in recent years, Palestine still lags on the global scale, with the numbers of illiterate women four times higher than those of men.

To help women emerge in the oPt's economic and political life, UN Women's Fund for Gender Equality is working with NGO, the Bisan Centre for Research and Development and its partner organizations to develop and remodel cooperatives for women into settings where they can meet, train and work with the approval of their families and communities.

The partnership has supported six existing cooperatives and helped to set up two more in the West Bank, empowering 1000 women between 2010 and 2011, and many more since. Whether processing food, breeding animals or keeping bees, the women are learning the technical skills to thrive individually and as a group. 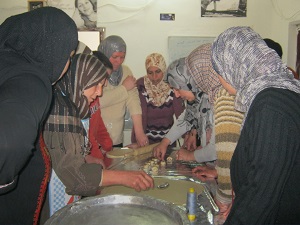 “The programme has taught women in the cooperatives about the management and value of the cooperative model, how to fairly distribute working hours, profits and losses, and pool resources and skills, for example, explains Rana El-Houjeiri, the Fund's Programme Specialist for the Arab States. “But each has also learned finance and management tools to help them identify business opportunities and expand their political space.

Each now earns a stable salary, but can make additional annual revenue. In Baita for example, women have each earned more than US$380 dollars annually.

The cooperatives have also begun to form advocacy coalitions, working with unions and civil society organizations towards, for example, better social protection for female informal workers. They've started to get involved with local administrative strategies, too. In one major success, the Palestinian Legislative Council took the women's demand for a social protection amendment to the law that governs the Territory's cooperatives, and has presented it for discussion at the council table.

The women have spoken of profound changes in their perspectives. Many report that they feel more confident in general, and more aware of their potential as community members. “90 per cent of my rights awareness came through this experience of lobbying and campaigning, “reports one member. “This is where I have realized what my rights are and where, when and how to defend them.

And as they themselves embrace a more dynamic social and economic role, mindsets around them have begun to change too. “Our community now recognizes us as active cooperative members, women who are important productive entrepreneurs, Khitam, now head of her cooperative, explains. “Today, we leave the house without the need for the permission of a husband or brother, and we do what is right for us.

The Fund for Gender Equality works to empower women and girls around the world through subsidies and high impact multi-year grants up to a million dollars, delivered directly to women's organizations and government agencies committed to gender equality.