Veronica Casimira, a Timorese farmer, arrives at the community meeting with freshly-picked bananas in a basket on top of her head. She is met by many friends, most from the self-help group that she started three years ago.

Her friends tease her, calling her Mana Abut, which means root or core in Banuk, the local dialect in the village of Memo in the western region of Timor-Leste. This is appropriate, as she has encouraged many other women to start their own businesses and self-help groups. “I am working like a slave, eating like a king, she says. 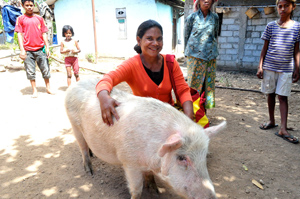 These self-help groups, collectives of women and men who work together in agriculture, raise livestock, fish, and make bricks for infrastructural development, have changed the financial situation and gender division of labour in many communities in the village of Memo in Timor-Leste. Memo rests in the mountainous regions of one of the most cash-poor areas of Timor-Leste. This area shares a border with Indonesia. Levels of human trafficking in the border areas have been decreasing recently, but this part of the country was once considered the hub for trafficking and petty crime.

The lives of Casimira and other self-help group members used to be very different. As one woman stated “Many of us were just farming for ourselves and couldn't get enough food to feed our children. It was impossible to grow enough vegetables and rice all on our own, and take care of the kids and all of our other household work.

All group members used to work independently in agriculture, but now work together to earn more money as their efforts combined actually produce more food and takes less time so they can take care of their personal needs at home as well.

The self-help group that Casimira started originally had 42 members, with the programme undertaking business management courses, life-skills training and other interventions to promote women's financial independence.

After undergoing a training of trainers course on Gender and Conflict Prevention, taught by a local civil society organization Casimira decided to train other women in starting their own groups to promote independence and income generation. Most self-help groups also serve as a refuge for survivors of domestic violence, widows and women heads of households. 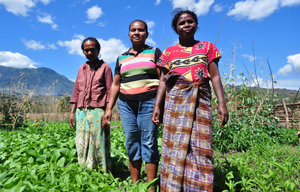 A self-help farming group in Tapomemo village, Timor-Leste, tending to their garden on 28 July 2012. Their garden has produced food for 12 families, and income for some women for the first time in their lives. Photo credit: UN Women

Over the last five years, the self-help groups are advanced through UN Women's “From Communities to Global Security Institutions: Engaging Women in Building Peace and Security Programmes — a programme which is supported by the U.K's Department for International Development (DFID).

Casimira spends a lot of time mentoring other self-help groups and is also one of the few women representatives in the village council. She advocates for women to work in local government as a chance for them to raise the profiles of their self-held groups in the community and to work on their peace building and mediation skills. Casimira also represents the district at national conferences and workshops, participates in all community-based events and is a voice for rural women at high-level functions.

She recently returned from the Philippines, where she was not only greeted by the community as one of the most successful and influential women in agriculture in the Asia-Pacific region, and also received agricultural training, which will enable her to contribute further in her community. It was a coup for a woman to have this reception, even more so for a woman from a very remote village in Timor-Leste.

Speaking about her work and what she wants to achieve, she says “I want to be a model for other women

Related News
30/01/2014
Sowing seeds, reaping income and independence, in Timor-Leste
28/02/2017
Women farmers of Nepal take charge of their lives and livelihoods
11/08/2022
In the words of Zarina*: “I am heartbroken, but hopeful”.
21/07/2022
UN Women and Ant Foundation launch ‘Together Digital’ to empower women entrepreneurs in the digital economy
16/06/2022
Enhancing livelihoods and business skills for vulnerable women in Somalia
END_OF_DOCUMENT_TOKEN_TO_BE_REPLACED