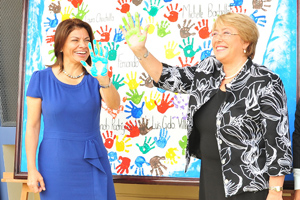 Michelle Bachelet, Executive Director of UN Women, met President Laura Chinchilla, with whom she held high-level talks, on the morning of 10 September , at the beginning of her two-day visit to Costa Rica.

At the start of the meeting, Bachelet expressed her profound sympathy to President Chinchilla and the Costa Rican people in the wake of the earthquake that struck Costa Rica on September 5th, and expressed her deepest concern for those individuals who were affected by the this natural disaster.

During the trip, Ms. Bachelet participated in a working session with members of the Costa Rican Cabinet, during which she was informed of a series of governmental initiatives that are aimed at the economic empowerment of women.

After this meeting ended, Michelle Bachelet and President Laura Chinchilla travelled from San Jose to the city of Cartago where they officially opened a Centre for the Care and Development of Young Children that the government of Costa Rica has built in order to provide practical support to female workers vis a vis attending to the needs of their children and older family members.

Afterwards, Michelle Bachelet participated in a meeting with the Board of Directors of the National Bank of Costa Rica, and at which Mayi Antillón, Minister for Economy, Industry and Commerce, and Maureen Clark, Executive President of the National Women's Institute [Instituto Nacional de las Mujeres (INAMU)] of Costa Rica were also present, in order to learn more about the precise details of the “Women's Bank credit programme, an initiative that was awarded by the Inter-American Development Bank in 2010.

At the end of the meeting, Michelle Bachelet visited a trades-fair, which had on display the various products that had been developed by the programme beneficiaries. Before ending her visit to the National Bank of Costa Rica, Michelle Bachelet responded to questions fielded by Costa Rican journalists working for a number of newspapers and TV and radio stations.

On Tuesday, 11 September, in the context of the “Safe Cities programme in San José, Michelle Bachelet gave a keynote speech on the issue of civic security, in the presence of President Laura Chinchilla and local authorities.

In the course her speech, the Executive Director of UN Women emphasized the need to include more women in the police-force, to promote access by women to the highest echelons of the constabulary and to positions which call for decisiveness and leadership skills, to raise awareness within the police-force, and at all levels, when it came to gender concerns, and to include a gender-specific component for women in public security policies.

And in this connection, Michelle Bachelet offered to President Chinchilla the technical back-up of UN Women in the implementation of public policies relating to these specific areas.

At the end of her visit, Michelle Bachelet visited Costa Rica's Supreme Court of Justice where she held a meeting with the acting President, Zarela Villanueva Monge and other judges.

In the course of the meeting, Michelle Bachelet discussed progress that had been made within the Costa Rican Legal Sector following the support it had given the previous year to the UNiTE Campaign of the UN Secretary General, Ban Ki-moon, so as to end violence against women.

UN Women's Executive Director also underscored the central role to be played by the legal sector if impunity, in her view one of the greatest obstacles to eradicating violence against women and achieving gender equality, were to be tackled head on.

Furthermore, Michelle Bachelet stressed the importance of having in place reliable and trustworthy data and statistics relating to violence against women, and highlighted the need for the creation of well-equipped Support Centres for victims of violence.

Michelle Bachelet summed up by stating that, despite the various initiatives that had been undertaken to eradicate violence against women, there was still considerable work to be done in this field, in view of the fact that the numbers of cases of violence committed against women had not gone down to the hoped-for levels.

On completion of her visit to Costa Rica, Michelle Bachelet, the Executive Director of UN Women, will visit Bogotá, Colombia.