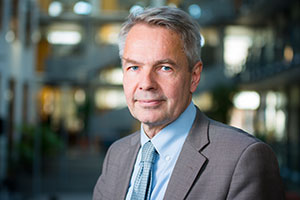 The Government of Finland has announced additional end-of-year core funding of EUR 5 million (USD 6.8 million) for UN Women. This adds to its contribution so far in 2013 of USD 9.15 million – bringing the country’s overall 2013 contribution to approximately USD 15.95 million. In addition, the Government has already pledged to provide EUR 14 million equivalent to approximately USD 18 million in core funding in 2014, making it one of the top donors to the organization’s core budget. In an interview, Finnish Minister for International Development Pekka Haavisto explains why his Government believes funding UN Women is such an important priority.

Gender equality is a fundamental human right, as well as a prerequisite of sustainable development. No country can afford not to use the talent and the potential of half of its population.

In all countries, including my own, there is room for improvement in the area of gender equality. In Finland, at the same time, I can clearly see how our determined efforts over decades - for instance in education, child care, and health - have taken us a long way in becoming the country we are today, and how they have contributed in a very significant way to the economic and social development and cohesion of the Finnish society.

Gender equality is a great engine of development all over the world. Women who are empowered, and able to realize their full potential, are an incredible force in taking whole nations forward, and in contributing to their well-being. It is the right of women, and for the good of their societies as whole, that they are able to fully enjoy from the benefits of  gender equality.

Gender equality and human rights are corner stones of Finland’s development policy. A very clear indication of the priority position that we give to gender issues is our core funding to UN Women, which has grown from 3 million euros in 2011 to 12 million euros this year. This is a truly phenomenal development, especially considering the tough times financially that we are all going through. In addition, Finland channels earmarked funding to those UN Women activities at country level where we feel that it can provide added value.

Very significant amounts of core funding are also channeled by Finland through UNFPA, which does crucial work in promoting the sexual and reproductive health and rights of girls and women. In this context, I also want to mention Tarja Halonen, former President of Finland, who does important work as co-chair of the High Level Task Force on ICPD, to promote sexual and reproductive health and rights.

Peace and security are issues that are particularly close to my heart, and have long been actively promoted in Finland’s multilateral and development policy. UN Security Council resolution 1325, on Women, Peace and Security, is an important priority for Finland.

Why is UN Women the best fit for channeling your development assistance?

Gender equality is a cross-cutting objective in Finland’s development policy. Gender issues are promoted through all our development policy instruments. UN Women, however, clearly stands out as the main channel in this area, and is an extremely important and valued partner for Finland.

As a UN agency, and a truly universal entity, UN Women has the legitimacy and a unique position from which to work with governments all over the world. It has an important role within the UN family, as mandated by the UN General Assembly, to coordinate gender mainstreaming in all UN funds, programmes and specialized agencies. It has strong expertise, as well as the vision, and a committed staff to promote gender equality and the empowerment of women. It also has to be given credit for being an encouraging example of UN reform merging different UN actors, to create a new and better one.

UN Women is still a young organisation that needs time and the necessary resources to fully prove itself. It has to respond to great expectations. I believe it will be able to do so, and to demonstrate the efficiency and effectiveness needed to produce maximum results in advancing gender equality globally.

Finland wants to contribute in a concrete way to gender equality, and to lead by example, by increasing significantly its funding to UN Women. I am happy to see our partnership reach new levels, and l look forward to many donors, old and new, taking up the challenge of providing UN Women with the resources it needs for its important work.