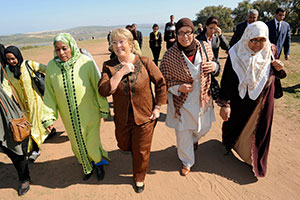 During a trip to Morocco to commemorate International Women’s Day 2012, former UN Women Executive Director Michelle Bachelet met with rural women of the Soulalyates ethnic group, who have been striving for inheritance and property rights. Photo: UN Women/Karim Selmaoui

UN Women congratulates Michelle Bachelet, our founding Executive Director and new President-elect of Chile. UN Women has made it a core priority to advance women's full and equal participation in decision-making. With a second term as President, we at UN Women could not be happier to see Ms. Bachelet as the 17th woman Head of State or Government worldwide.