Naila Chowdhury worked for 17 years for Grameen, 10 of them with Grameenphone, the largest Mobile Phone Operator in Bangladesh. In 1997, she was the only woman amongst the 16 directors on the company board. Restless and entrepreneurial, she decided to go independent and founded TeleConsult Group.

In her business plan, she included a component to promote women’s empowerment by supporting skills development and Information and Communication Technologies training for women. 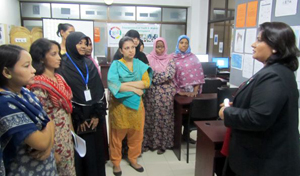 “I constantly went towards what I could do more for women who need us much more, who need networking and empowerment and encouragement to come out of their shell,” says Naila.

The TeleConsult Group is one of the over 500 companies around the world that have signed the Women’s Empowerment Principles, a roadmap of seven principles jointly created by UN Women and the UN Global Compact for businesses, offering guidance on how to empower women in the workplace, marketplace and community.

Discrimination and gender inequality, combined with easy accessibility to acid, has become the horrifying and lethal formula for attacking women around the world. Acid attacks involve the intentional throw, spray, or pouring of acid onto the faces and bodies of women.

According to the Acid Survivors Foundation, Bangladesh has the highest reported incidence of acid violence in the world with 46 per cent of the perpetrators being someone known to the victim. An acid attack takes place every two days in this – South Asian country.

Lavina and Iffat* are two of the more than 1,000 women who have been trained in office skills and ICT by TeleConsult Group since 2011 and among the 35 call centre staff members.

Lavina, originally from a district in southwestern Bangladesh, was attacked by a relative in August of 2000, for declining a marriage proposal. Her assailant burnt the left side of her face and her left hand. Subsequent treatment was needed for more than four months, but her work today has made her self-reliant and a role model for many.

“We can live the way we want now, talk to the people like we want to. The best thing is that we are survivors, and as women we are now able to help other women,” says Lavina.

Iffat was only 15 years old when she was attacked, losing her carefree adolescent years in one fatal blow. After overcoming long and painful treatments to heal the burns on her neck, back and shoulders, she has come a long way. At 27, she is a source of inspiration and strength to other women facing abuse and who reach out to the helpline. She counsels them with legal, psychological and medical information, on how to prevent further violence.

Another WEPs-affiliated company that is working to end violence against women is Turkey’s leading technology and communications company, Turkcell. It supports the “Zero Tolerance for Violence against Women” campaign of the Ministry of Family and Social Policies by integrating mobile technology and mass communication capabilities to empower women in daily social life.

For example, they are working on a new mobile technology with the Turkish Family and Social Policy Ministry that aims to combat domestic violence by providing “women panic buttons” which transfer calls directly to the 155 police emergency line.

Companies like Turkcell and TeleConsult Group are not alone. The Women’s Empowerment Principles are one of the many ways UN Women is working with the private sector to advance women’s empowerment. Since their launch three years ago, more than 500 CEOs have signed onto the Principles, from major corporations such as Coca Cola, Yves Saint Laurent, Alcatel-Lucent, Infosys and Microsoft, among others.

These companies agree to take measures to foster women’s empowerment, such as include women at the highest levels of management, empower women entrepreneurs, and end sexual harassment in the workplace. Some companies are setting gender diversity targets to increase the number of women at management levels (there are only 21 women CEOs in the Fortune 500 companies today) or establishing equal pay.

Others are reaching out to youth –girls and boys—to nurture interest in science and engineering. Companies are also changing their recruitment policies to seek higher percentages of women for all jobs, or altering procurement practices to include more women vendors.

The Principles will kick-start a new chapter of commitment this year at the 5th Annual Equality Means Business Event, “Inclusion: Strategy for Change,” to be held on 6 March, during the 57th Commission on the Status of Women. The first Annual WEPs Leadership Awards – saluting CEO commitment and innovation towards gender equality will be introduced, where leaders who “champion” gender equality, diversity and inclusion in their companies will be honoured. 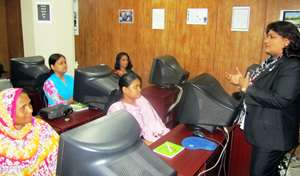 As Naila puts it, “You can achieve many things but we tend to forget to be humans. The Women’s Empowerment Principles pull you back one step behind to make you think about others and that is how we drive a better community and a better world. The principles help you to be a better person and a better provider.”