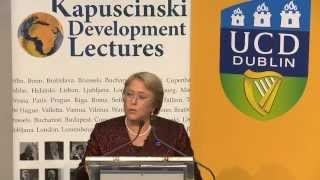 Participating in this high-level series of development lectures by top global thinkers the Executive Director of UN Women said we need to redefine progress as “that progress where we measure how well we promote inclusion and reduce inequalities.” Read more » 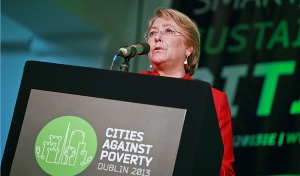 Speaking at the 8th Forum World Alliance of Cities against Poverty (WACAP) in Dublin today UN Women Executive Director Michelle Bachelet underlined the need to build safer cities, and highlighted the UN’s Global Safe Cities Initiative that it is now working in more than 20 cities around the world. Read her remarks »

Inequalities are and will continue to be the main challenge of our century: speech by Michelle Bachelet on post-2015 consultations 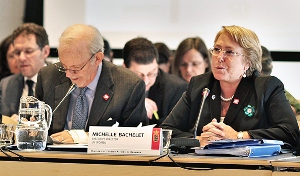 Speaking at the Global Consultation on Addressing Inequalities on 19 February in Copenhagen, the Executive Director of UN Women shared the final report of the consultations on addressing inequalities in the post-2015 development agenda, co-led by UN Women and UNICEF. Read her remarks »

15 February, 2013 - Under-Secretary-General and Executive Director of UN Women, Michelle Bachelet, will start a two-day visit to Denmark on Monday 18th February and a three day visit to Ireland from 20-22 February.

In Denmark, Ms. Bachelet will address the Global Consultation on Addressing Inequalities in the Post-2015 Development Agenda.  UN Women co-chaired a series of consultations on inequalities together with UNICEF in the context of the post-2015 agenda.

She will also visit the UNICEF Supply Division where health kits, medicines, blankets, water and sanitation supplies for children are stored to respond to emergencies, including in Syria, Mali and the Central Africa Republic.

In Ireland, Ms. Bachelet will meet with President Michael D. Higgins; Deputy Prime Minister and Minister of Foreign Affairs and Trade Eamon Gilmore; Minister of Justice, Equality and Defense Alan Shatter and other high-ranking Government officials. She will also address The World Alliance of Cities Against Poverty ( WACAP ) and speak about the joint UN Women, UNICEF and UN-Habitat Safe Cities Global Programme that aims to increase safety and prevent and reduce violence against women and girls in public spaces.

Ms. Bachelet will further deliver the Kapuscinski Development Lecture on women’s empowerment and role of gender equality in the implementation of the Millennium Development Goals as well as in the process of setting new, post-2015 global goals.

Related News
07/03/2013
Speech by Michelle Bachelet : Reclaiming Public Spaces for the Empowerment of Women and Girls
20/02/2013
Opening remarks of Michelle Bachelet at the 8th Forum of the World Alliance of Cities against Poverty (WACAP) “Smart, Safe and Sustainable Cities”
06/03/2013
Presentation by Michelle Bachelet and Julia Duncan Cassell at a side event on the COMMIT Initiative
19/02/2013
Dublin joins the UN Global Safe Cities Initiative
14/12/2012
Press Release: Countries from every region announce new initiatives to end violence against women
END_OF_DOCUMENT_TOKEN_TO_BE_REPLACED