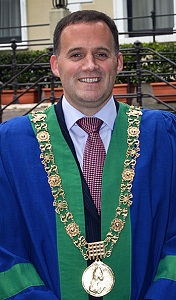 As local decision-makers gather in Dublin on the occasion of the 8th Biennial Forum of the World Alliance of Cities Against Poverty (WACAP), co-organized by the City of Dublin and UNDP, in partnership with UN Women and UNITAR, UN Women speaks with Lord Mayor of the City, Mr. Naoise Ó Muirí, who is committed to making Dublin a safe, smart and sustainable city. Dublin is the first city in a developed country to adapt and upscale tools and approaches of the UN Global Safe Cities Initiative[i].

1) Why is Dublin interested in joining the Safe Cities Initiative?

Dublin City Council has a strong commitment to promoting equality, combating discrimination and ensuring that the city is open and welcoming, a city of equal opportunities for all.

We are delighted to sign up to the Safe Cities Global Initiative because we strongly agree that everyone has the right to use and enjoy public spaces in peace and without harassment irrespective of their gender as well as age, ethnic background, sexual orientation and disability. Freedom of movement is a basic human right and there are very positive linkages with Ireland’s recent election to the UN Human Rights Council; a great honour and responsibility for our country.

Cities across the world face the challenge of violence and harassment but this is not to say that we have to accept this as part and parcel of urban life. Where women and girls feel threatened or are prevented from participating in all aspects of city life, including work, education, leisure and social activities or political and community activity then this represents a violation of their equal rights as citizens. There is evidence to support the idea that a city that is safer for women and girls is safer for everyone.

Dublin has a very strong policy of opening up to the world, of developing links with other cities, of learning from them and sharing experiences, and we see this UN initiative as a key element in our internationalisation strategy. There is an economic dimension to this; there is general agreement that there are three characteristics necessary for a successful and competitive city and these are expressed in the phrase “A Safe, Clean, Green City”. A Safe City is critical to attract residents, businesses, employment, investors and tourists.

2) Why is it important to address violence against women at the local level?

The problems of harassment arise in particular public places, at particular times of the day or night or on particular public transport routes, and there needs to be local solutions to those localised problems. We will choose a location for the initiative that will include women who are in low income jobs and/or are disadvantaged, as these women and children are most vulnerable to such harassment.

Of course there also needs to be policies and programmes put in place at city or metropolitan level and at national level and that is why we will have national representatives on our Working Group so that the city programme can influence national policy. We are adapting this Safe Cities Global Initiative not because Dublin is a particularly unsafe city, but because we want to be proactive, not complacent, and to put in place improvements where necessary.

3) Which organizations and partners do you expect to involve in the Dublin Safe City Initiative?

We are putting in place a Working Group that will include representatives of women’s organisations including those whose remit is combating sexual violence against women and achieving women’s equality: An Garda Síochána (police), the Department of Justice and Equality, Mandate (a trade union representing service workers that has a large woman membership), employers, the statutory Equality Authority (its remit includes combating discrimination and promoting equality on the basis of gender), and of course Dublin City Council.

Dublin has a clustering of leading hi-tech companies and we would like to engage with them to identify innovative and simple ways that, for example, women can participate in the initiative, report incidents of harassment, suggest responses and so on. We would see this as part of our wider project to promote Dublin as a ‘Smart’ or Digital City.

4) What initial steps will Dublin take to start the initiative over the coming weeks?

We are honoured and delighted that Mme Michelle Bachelet, Executive Director of UN Women and former president of Chile, will join us in Dublin for the 8th World Forum of Cities Against Poverty at which time I will make the official announcement of Dublin’s commitment to the Safe Cities Global Programme. Dublin City Council is co-hosting this Forum with the United Nations Development Programme (UNDP) and in partnership with UN Women on 20 and 21 February 2013. A significant element of this Forum will address issues of safe cities for women and children and this will give Dublin a great opportunity to learn from other cities and their experiences of implementing the Safe Cities Initiative. In implementing the programme, we will be following the detailed advice set out in the UN Safe Cities Guidelines document.

To watch a video of the Lord Mayor’s opening remarks at the WACAP Forum, click here >>