Bolstering efforts to end impunity for femicide and gender-motivated killings

“We are here to discuss the most extreme manifestation of violence against women: gender-motivated killing of women, also called femicide. We are here to discuss the killing of women, simply because they are women,” said UN Women Executive Director Michelle Bachelet, speaking at a side event on femicide on 8 March during the 57th session of the Commission on the Status of Women (CSW57). 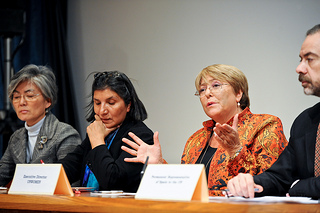 Citing that report, Ms. Bachelet said that between 2004 and 2009 the global scale of femicide was estimated at approximately 66,000 victims per year – almost one-fifth of all homicide victims. However, she cautioned that most countries do not classify these as “femicide” or “gender-motivated killings,” so it is currently impossible to know its true magnitude.

“And today, in many countries, we find that impunity is too often the norm, rather than the exception,” noted Ms. Bachelet. “It is time to strengthen justice systems; provide training to the police and judges to eliminate stereotyping and prejudices towards women; improve support services to survivors and families; and dedicate planning and budgeting to preventing violence against women and girls.”

Ms. Bachelet elaborated on the  work UN Women is undertaking in this regard, in partnership with other UN agencies and through the Secretary-General’s Campaign UNiTE to end violence against women, including the development of a regional “Protocol for the Investigation of Violent Gender-Based Killings of Women: Femicide for Latin America.” This pioneering work is being done with the UN High Commissioner of Human Rights, the Federation of Associations of Human Rights, and the Government of Spain.

This protocol will provide guidelines for the effective investigation of violent deaths of women, to ensure that the process takes into account the context, identifies the relationship with the perpetrator, and conforms to States’ international obligations.

The side event focused primarily on Latin America because half of the 25 countries with very high femicide rates are in that region, according to a 2012 report by the Small Arms Survey cited in a presentation by Kyung-wha Kang, UN Deputy High Commissioner for Human Rights.[2]

In addition to the need for a regional protocol, she highlighted the need for specific legislation criminalizing gender-motivated killings so that femicide is not covered by aggregating homicide.

Ms. Kang said laws should “integrate prevention and protection measures for victims, witnesses and their families, allowing for victims’ participation in criminal processes and providing for gender-sensitive investigation mechanisms.” Ms. Kang also stressed the need to ensure norms and laws are understood by the officials responsible for investigating and prosecuting such crimes.

The international obligations of States to crack down on femicide were also emphasized by panelist Patricia Olamendi, a member of the Committee of experts of the Belém do Pará Convention of the Inter-American Human Rights system, as well as a member of the UN Working group on discrimination against women in law and in practice.

She cited a ground-breaking 2009 judgment by the Inter-American Court of Human Rights in the “Campo Algodonero” case which involved the murder of three women in a cotton field, which found Mexico in violation of the American Convention of Human Rights and the Belém do Pará Convention. “The case is particularly significant as the Court found that Mexico had failed to prevent the murder and enforced disappearance of the three young women in a structural context in which hundreds of women had been murdered and disappeared and the State had failed to act,” explained Olamendi.

She said in order to avoid impunity, the Court recommended that States sign protocols, much like the one currently being championed at a regional level by UN Women, OHCHR and the Government of Spain.

At a global level, Spain is also currently spearheading a resolution on femicide/feminicide, as discussed by panelist Fernando Fernández-Arias, Counsellor Minister from the Permanent Mission of Spain. The resolution is to be presented at the next session of the UN Human Rights Council in June 2013.

“Spain wants the resolution to point out the global nature of this issue which can adopt several forms and does exist in every society,” he said. “The resolution should express States’ strong commitment to put an end to this plague.”

Speech by Michelle Bachelet on “Gender-Motivated Killings of Women, Including Femicide”

Related News
12/03/2013
Speech by Michelle Bachelet on “Gender-Motivated Killings of Women, Including Femicide”
15/05/2013
UN Women calls for urgent and effective action against femicide
04/04/2013
Femicide in Latin America
29/11/2017
The long road to justice, prosecuting femicide in Mexico
06/03/2013
Presentation by Michelle Bachelet and Julia Duncan Cassell at a side event on the COMMIT Initiative
END_OF_DOCUMENT_TOKEN_TO_BE_REPLACED