“Sound mixing is as easy as cooking a curry”: Q&A with Bianca Miglioretto

As the UN marks World Telecommunication and Information Society Day, UN Women speaks to the Vice-President of the Women’s International Network of the World Association of Community Radio Broadcasters, Asia Pacific Chapter, on her work and on introducing radio technologies to community radio producers.

1. Tell us a bit about community radio, and its role in society. 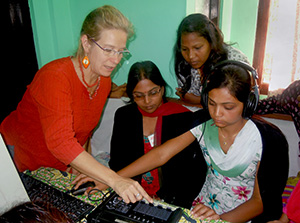 In the radio sector we have public radio, private commercial radio and in more and more countries we find a third sector of civil society radios or community radio. Community radio can have many different forms, serving an ethnic community, a group of special interest, such as women, students, jazz lovers or serving a geographic community in a village, city or neighbourhood. Many community radios serve different communities. What community radios do have in common is that they give a voice to the people who are usually excluded from mainstream media, through community participation in the programming.

These radio stations are not-for-profit, for they can carry commercials but all earnings are reinvested into the radio and do not go to private pockets, as in commercial radio. The stations are owned and managed by the community in the form of a democratic association, NGO, foundation, etc., with community participation in decision-making, and they form an alternative to the mainstream radio.

Women are often limited to the private sphere and do not have much say in public. Their needs are often not taken care of. Community radio can give women a public voice, enable their participation in public debates and let them voice their issues and concerns. Information is power! Community radio can empower women by providing them with crucial information they do not get elsewhere. And it can change the image of women in society by portraying women’s achievements and potential. Many community radios have not yet realised the huge potential they are missing by depriving women broadcasters from equal participation in the radio station. We should never forget, the majority of radio listeners are women, but most radio stations cater much more to men.

2. Tell us about your work with community radio producers and what is AMARC-WIN?

AMARC-WIN is the Women’s International Network within AMARC, the World Association of Community Radio, which has various chapters in different parts of the world. I was elected to represent AMARC-WIN and am on the board of AMARC Asia Pacific. AMARC-WIN aims for women’s full and equal participation in community radio and in the community radio movement. We also want to change the stereotypical images of women in the media and wish to empower women through community radio.

3. Radio depends on technology. How welcoming or fearful are community radio producers of this technology, especially women producers, who may not be using technology widely in their daily lives?

Younger women are often very eager to learn how to handle technology, especially ICT and studio technologies. But many times they are deprived by their male colleagues in the radio station from learning how to do digital editing or how to operate the mixing console. Community radio stations often are short of computers and women do not get the chance to practice because the majority, the male technicians, claim it takes the women too much time to do the editing; they can do it faster. This also deprives women from exploring the creative potential of digital productions. 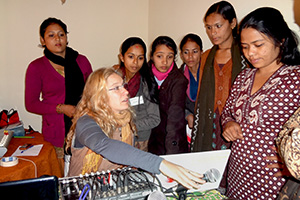 Bianca Miglioretto explains studio operation to Nepalese women community radio broadcasters during the training “Empowering Women Through Community Radio” by AMARC-WIN in Kathmandu, 2011. Some of the participants never had a chance to operate a mixing console and were eager to do so, hands-on. Photo credit: Usha/K.C. of ACORAB-CIN

Older women sometimes shy away from technology, not because they are afraid of it, but because they are afraid of breaking something. Many male technicians are very good at giving the impression that all this equipment is very complicated and sensitive, which is not true. In technical trainings, before explaining the mixing console, I usually ask women if they know how to cook a curry or a cake. Most women say, ‘yes it is easy.’ So I tell them mixing a recording is even easier.

4. Community radio facilitates information-sharing. Does it also go beyond this purpose and create change?

I’ll quote a statement on this: “Vision: A well-informed people living in a harmonious community; with a rich culture and tradition working for sustainable environment, good governance, and community development; people enjoying equality and the benefit of social justice, a community collectively works for the common good.”

Just as Radyo Sagada in the Philippines put that in their vision statement, most community radio programming aims to create change for the better in their community. Some have specific programmes to end violence and some start to discuss domestic violence on the radio, which has always been a taboo.

AMARC-WIN conducts every year an international radio campaign on 16 days of Activism, to end all forms of violence against women from 25 November to 10 December. Radio stations from different parts of the world take up the issue in their programming in different languages. Some broadcasters have told us that there is less violence in the communities and more women are reporting violence and seeking support.

According to our surveys, most women respondents say that radio work empowers them and it makes them happy to provide better information to their listeners, especially women listeners. They also gain recognition in their community through the services they provide. But they wish to have more airtime for women’s programmes, more women producers, especially volunteers from the community, and they wish for more feminist content. Some also criticise the women-unfriendly environment in the radio station with sexist jokes on air and verbal harassment in the radio station.

6. Can you tell us of some memorable experiences?

During my many years in community radio and the seven years that I have been the Vice-President of the Women’s Information Network, Asia Pacific, I have heard many stories about the difficulties women encounter doing their broadcast work. But I have also heard many positive experiences. In radio training this year in India one participant shared her story, about how her in-laws didn’t want her to continue her work at the radio station because they felt she should be at home and take care of the household. She tried hard to do both. Then she started to turn on the radio every time her programme was on-air. When her in-laws heard what she was actually doing on the radio, they became very proud of her and no longer opposed her working in the community radio.

In the same training, another senior radio reporter told me that the discussion on feminist reporting was an eye opener to her because up to now she always thought she had to portray women as suffering victims to be pitied. But now she realized that women are strong and that it is important to also report success stories and the potential of women’s contribution to the community.

After an AMARC-WIN women’s empowerment training in 2011 in Nepal, the participants from the region of Pokhara were able to convince over 20 –male– station managers to agree to an empowerment campaign for women community radio broadcasters.