(Bogota, Colombia) — With 25 participants from around the world, including public prosecutors, investigators, human rights researchers, forensic experts and public policy advisors, a special training course on “Investigating Cases of Sexual and Gender-based Violence as International Crimes” is taking place in Bogota, Colombia from 19-25 January.

A collaborative project between UN Women, Justice Rapid Response (JRR) and the Institute for International Criminal Investigations (IICI), the course aims to increase the pool of experts that can be rapidly deployed to lead and participate in investigations into conflict-related gender-based crimes, with a focus on Spanish-speaking experts from the Latin America and Caribbean region.

Upon successful completion of the training, experts will become eligible for certification on the Sexual and Gender-based Violence (SGBV) investigations special roster, within the broader JRR roster, which has been recognized internationally by Human Rights Council Resolution A/HRC/RES/23/25. The resolution calls on the UN and Member States to utilize the special roster to ensure the rapid deployment of expertise to investigate allegations of mass rape or systematic sexual violence.

Experts on the SGBV roster are available for swift deployment upon requests by States, as well as the United Nations and other international institutions with the jurisdiction to carry out such investigations. There have already been several successful rapid deployments of these experts to Commissions of Inquiry for Cote d’Ivoire, Libya, the Syrian Arab Republic and North Korea, matching every request for support from these bodies. There have also been deployments to the International Criminal Court.

“As I am currently working in Cote d'Ivoire where incidence of sexual and gender-based violence including rape is recurrent, thanks to this course I am better-equipped to conduct interviews with survivors and collect all necessary information pertaining to crimes of SGBV,” says Federica Seymandi, Human Rights Officer with the UN Operation in Cote d’Ivoire (UNOCI) and the Office of the United Nations High Commissioner for Human Rights. “I believe that courses such as this one will significantly contribute to enhancing survivors' access to justice around the world where competent investigators are and will be deployed to carry out field missions aiming to put an end to impunity for heinous crimes such as rape and sexual slavery.” 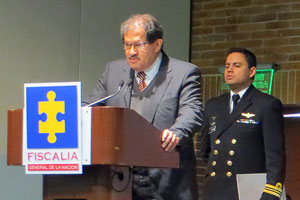 H.E. Angelino Garzón, Vice-President of the Republic of Colombia, speaks at the opening of the training course on investigating sexual and gender-based violence as international crimes. Photo: Justice Rapid Response/Salome Stevens

The training is being held at the invitation of the Office of the Attorney General of Colombia and is supported by the Governments of Canada and Colombia, as well as Denmark, Finland, Liechtenstein, Sweden, Switzerland as well as through core funding to UN Women.

This course in Bogota is the fourth of its kind. The first training was held in The Hague, Netherlands in September 2012; with a second one in Pretoria, South Africa in January 2013 and a third in Doha, Qatar, in September 2013.

Related News
Training experts to investigate cases of sexual and gender-based violence as international crimes
Joint Statement by Phumzile Mlambo-Ngcuka and Zainab Hawa Bangura on the signing on 15 December 2015 of the agreement on conflict victims between the Government of Colombia and FARC-EP
Sepur Zarco case: The Guatemalan women who rose for justice in a war-torn nation
Sepur Zarco: In pursuit of truth, justice, and now reparations
Landmark ruling in Guatemala a victory against sexual violence in armed conflict
END_OF_DOCUMENT_TOKEN_TO_BE_REPLACED