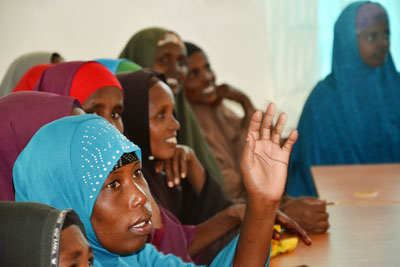 In the world’s largest refugee complex — the sprawling Dadaab settlement in Kenya’s North Eastern Province —  women listen attentively during a business management workshop held at a hospital in one of its newest camps, Ifo 2.

Leila Abdulilahi, a 25-year-old Somali refugee and mother, has brought her 5-month-old along, while her four other children wait at home. She asks question after question, eager to learn more. Leila has lived in the camp for the past three years and has no source of income, so her family depends on the rations distributed by the World Food Programme. Unlike others, who have called Dadaab home since 1991, at the start of the civil war in Somalia, Leila is a ‘new arrival’ – a term used for those who came after the 2011 drought and more recent military intervention against extremist groups.

According to the UN Refugee Agency, as of September 2014 there were 341,359 registered refugees in Dadaab — the world’s largest refugee camp — half of whom are women.

“We are afraid to go fetch firewood in the forest. Bandits also attack us in our own homesteads and rape us,” says Leila. “If I had the money I would just buy firewood and I wouldn’t have to go or send my daughter to the forest.”

According to the Kenya Red Cross Society, rape rates are highest in Ifo 2, which sprawls across 10 km² and is located approximately 100 kilometres from the Kenya-Somalia border. Created in 2011, Ifo 2 is the newest camp in Dadaab and many safety measures are yet to be put in place, such as lighting, fencing, guards and other community protection mechanisms for the overcrowding.

Through its Peace and Security and Humanitarian Action Programme, funded by the governments of Finland, Sweden and Japan, UN Women has been supporting and working closely with the Kenya Red Cross Society to implement a livelihood project in Ifo 2.

“The lack of livelihood opportunities is a contributing factor to sexual and gender-based violence at the camp,” says Idil Absiye, Peace and Security Specialist with UN Women Kenya. She says providing women with the opportunity to earn a living is an important step that will help them fend for themselves in the camp and when they go back home.

The initiative also provides counselling services to survivors of sexual and gender-based violence, and family mediation services at the Ifo 2 District hospital, with support from UN Women. Initial results include more sexual and gender-based violence cases now being reported. According to Counsellor Gertrude Lebu, the Gender-Based Violence Centre now receives up to 15 cases on an average day. Men have also been seeking family mediation with their wives. 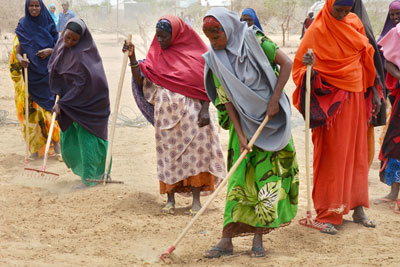 Beneath the scalding sun that has parched the landscape of north-eastern Kenya, 10 women are digging the dry, dusty land using rakes and sticks. When dust storms come, they use their scarves to shield their eyes. They hardly notice the harsh conditions as they dig, their focus on three months later when they will be harvesting their horticultural produce.

Income-generating activities in Dadaab refugee camps are rare, and agriculture even more so, because of harsh weather conditions and extreme poverty. Women sometimes sell a portion of their food aid (which consists of maize, wheat, beans, soya, pulses and cooking oil) in order to be able to purchase fruit and vegetables, school supplies and pay for their children’s school fees.

Providing for their families means everything for mothers like Leila. It means not having to fight with their husbands for food, school fees or other basic needs, if they can provide for themselves and their families. 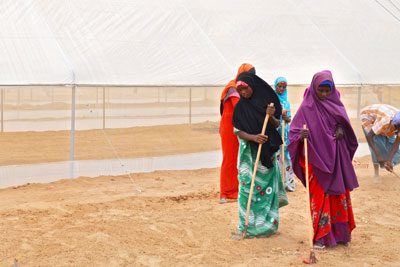 Ephraim Karanja, the Sexual and Gender-Based Violence Programme Coordinator with the Kenya Red Cross, says six greenhouses have been bought, and the women are busy preparing the land to plant and sow crops. They will sell their produce at a new market being built in Dadaab as part of the project, which will reduce the safety risks of travelling to the markets in towns nearby.

“I want to open a shop. With the profit I make, I will buy clothes, vegetables and fruits for my children,” says Leila.

She and 300 other vulnerable women will be trained in business management and horticulture agriculture and supported to start a business that will help sustain their families.

Higala Mohammed, a farmer from Somalia, is optimistic about the group’s labour. Inspired, she has also set up a small vegetable garden next to her makeshift tent where she grows Barere, a traditional Somalian vegetable. “We need all the nutrients we can get here,” she adds.

Leila’s pathway to independence makes her hopeful. “I want to work and support my family, even when I return home someday — and I will open a bigger shop,” she says.