The need to focus post-2015 discussions on gender was one of the main recommendations at the conclusion of the Asia-Pacific Regional Preparatory Meeting for the 58th Commission on the Status of Women (CSW58), held 12-13 February in Bangkok, Thailand. They called for a specific goal on gender equality –with the same urgency, stature and significance as the eradication of poverty and maternal mortality, or the universal right to education for all – as well as the integration of gender equality across all other goals and targets for the new development agenda to replace the MDGs, post-2015. 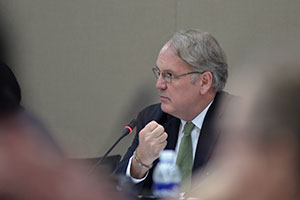 At the Asia-Pacific Regional Preparatory Meeting attended by Member States of CSW, government representatives had an opportunity to reflect on the achievement of the Millennium Development Goals (MDGs) in the Asia-Pacific region. The consultations were opened by UN Women Deputy Executive Director John Hendra, UN Women Asia and the Pacific Regional Director Roberta Clarke, and Nanda Krairiksh, Director of Social Development Division, of the UN Economic and Social Commission for Asia-Pacific (ESCAP)

In his opening remarks, Mr. Hendra said: “Women in particular in the Asia-Pacific region continue to face severe deficits in health and education, and in their access to power, political visibility and rights as the region has seen slow progress in terms of women’s participation in decision-making, with the second-lowest percentage of parliamentarians who are women.”

The intergovernmental meeting agreed on the need for a specific goal on gender equality that would : a) prevent and respond to violence against women and girls, b) expand women’s capabilities and access to, and control over, resources and c) equal decision-making in households, public and private spheres.

The meeting recognized that rising inequality and represents an urgent challenge with multiple implications for the realization of economic and social rights of women and girls and the achievement of the MDGS, and that extreme inequality endangers the pace and sustainability of growth in the longer term.

They agreed that several critical gender equality issues were not mentioned by the MDGs, such as violence against women and girls, women’s disproportionate share of unpaid care work and multiple roles played in family and society, women’s equal access to assets and productive resources, the gender wage gap and women’s equal participation at all levels of decision-making.

Ahead of the two-day meeting, the women’s rights civil society organizations (CSOs) discussed the persistent causes of intersecting gender inequalities at an Asia-Pacific Civil Society Consultation for the 20-year Review of the Implementation of the Beijing Platform for Action and for CSW58, held back-to-back on 10-11 February. They agreed that the CSW/Post 2015/SDG/Beijing processes should not retreat from the achievements of Vienna for Women’s Human Rights, the Programme of Action agreed to at the International Conference on Population and Development (ICPD) and the Beijing Declaration and Platform for Action.

The regional CSOs, some of which are members of UN Women Asia-Pacific Regional Civil Society Group, called for a development agenda guided by the principles of universality of human rights, non-discrimination, inclusion, implementation and accountability and for a new development framework that is transformative.

“It must address the structural causes of inequality and marginalization. It must address the convergence of the pernicious effects of globalization, militarism and conflict and fundamentalisms that particularly target women’s bodies and livelihoods,” reads the joint statement, which was read out at the conclusion of the meeting.

The CSO statement also endorsed the call for a stand-alone gender goal which would reflect genuine commitment to transforming power inequalities. They said eliminating violence against women must be a target of the post-2015 agenda as well ensuring decision-making of women in the home, in the community, in development planning and implementation.

Both preparatory meetings were co-convened by UN Women Regional Office for Asia and the Pacific and the Social Development Division of ESCAP under the auspice of the UN Regional Coordination Mechanism Thematic Working Group on Gender Equality and Empowerment of Women.