In Kyrgyzstan, we need to expand women’s access to economic resources

In the words of Gulnara Baimambetova, a 57-year-old Kyrgyz woman who has spent more than 36 years advocating for the social and economic rights of rural women through the Women Entrepreneurs Support Association (WESA), which is a grantee of UN Women’s Fund for Gender Equality.

I come from Kyrgyzstan, a small, mountainous country located in Central Asia. After independence in 1991, Kyrgyzstan proclaimed itself a democratic state guaranteeing equal rights for men and women, protecting the legitimate interests of each citizen, and safeguarding the right to private property. However, this is often not the case for women in my country who face many obstacles in attaining these rights. 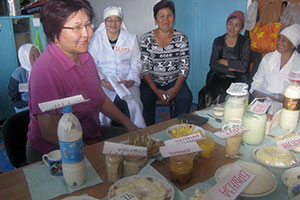 Gulnara Baimambetova with the graduates of WESA Association courses on milk processing.

Women make up 52 per cent of our population, but only 55 per cent of them are employed in comparison to 79 per cent of the male population. In addition to having a higher rate of unemployment, Kyrgyz women make lower average wages and have higher levels of migration—leaving Kyrgyzstan for nearby countries to find work. To add to this, Kyrgyzstan is the second-poorest nation in Central Asia, with more than half its population living below the poverty line.

Numerous factors have had a negative impact on improving the status of Kyrgyz women, particularly unequal access to inheritance, land and property rights, which are particularly important as we heavily depend on agriculture. These obstacles often stem from the dominance of patriarchal traditions and ideologies, imperfect laws and a limited awareness among women of their rights.  These restrictions reduce women’s socioeconomic status, limit their economic opportunities, increase their dependence, and subject them to growing and multiple forms of violence. In addition, the limitation of women’s participation in governance reduces our voice and contribution to the public, social and political life of the country.

I have devoted 36 years of my life to work on social issues. Before getting involved in the NGO sector, I worked in government institutions, including the State Property Fund, which was engaged in the privatization of State property, including land. During that time, I discovered that women as well as girls had been largely excluded from being granted property because of dominant patriarchal views and traditions and simply because people did not understand why women and girls needed to be equal participants. It was only then that I knew more had to be done.

It was over 20 years ago that, with like-minded people, we created an association called the Women Entrepreneurs Support Association (WESA). One of our priority activities became providing legal support and assistance to address the issues of women's and girls' access to land and other economic resources.

Since that time I have been working with and advocating for rural women in the fight to solve social and economic problems through WESA. The Association, where I now Chair the Board, has been able to raise the issue of women's access to land, which has led to improvements in legislation and it continues to promote important issues in order to improve the quality of State services and institutional practices. More than 30,000 women and their families have benefited through initiatives that have facilitated their access to land and other economic resources.

However, not all issues are quickly or fairly resolved for women, so the change that I hope for is to see State authorities take into account the special needs and demands of women in the nation’s development plans. The Government should understand the needs of marginalized groups, particularly women and girls, and be responsible for the international and national obligations on equal rights and opportunities for men and women. This is how Kyrgyzstan can pull itself out of poverty and empower all of its citizens.

For me, participation at CSW58 is significant as it will enrich my knowledge of what women in other countries are doing to enhance women’s socio-economic status, particularly in countries in transition. It will also help to enhance the dialogue on development with the involvement of a wider range of individuals and will provide an opportunity for me to go home with some new ideas and actions, so that we can more effectively contribute to expanding women’s access to economic resources.

The views expressed by CSW participants in these blogs are their own and may not necessarily reflect those of UN Women.

Related News
10/10/2017
Empowering women in the farthest corners of Armenia
12/03/2014
Remarks by Executive Director at a side event on How the Sirleaf Market Women’s Fund of Liberia is Spearheading the Market Women’s Movement across Africa
06/03/2014
In the words of Aili Limakka: We must embrace diversity by accepting our past
30/01/2020
From where I stand: “Expanding economic opportunities of women is key to ensure safety and prosperity”
12/09/2019
From Tanzania to Algeria, rural women are taking charge of their lives and livelihoods
END_OF_DOCUMENT_TOKEN_TO_BE_REPLACED