Dying to live: the gender dimension of child mortality in India

Sharing the voices of Indian women, a new UN Women report details work towards meeting MDG targets and sheds light on the issue of female infanticide, son preference and violence against women.

“He used to beat me up without any reason. It was an everyday affair. I had multiple miscarriages,” recounts Bhuri Bibi with a forlorn look in her eyes. She now works as a casual labourer and lives with her 4-year-old daughter in her maternal village in the Sehore district of the province of Madhya Pradesh, in central India.

“Six years ago, my husband threw me out, as he did not want to stay with me anymore,” she says. “I lost three children. They were stillborn. He accused me of not being able to procreate healthy babies and deserted me.” 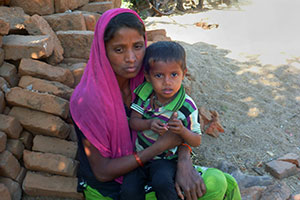 Bhuri Bibi and her daughter. Photo: UN Women/Swapna Bist-Joshi
The experiences Bhuri Bibi has endured have scarred her and she doesn’t trust easily today. Her life revolves around her daughter, who she says is her sole reason for existence. The little girl clings to her mother without letting go even for a moment.

Bhuri Bibi’s story is not uncommon. According to the 2005-2006 National Family Health Survey, in India, about 37 per cent of ever married women had experienced violence at the hands of their spouse.

Domestic violence during pregnancy is a major contributor to child mortality, a predicament Bhuri Bibi’s all too familiar with. Research shows that in these instances there is an increased likelihood of premature labour, lower infant birth weight and stillbirths. Millennium Development Goal 4 calls for a reduction in child mortality, aiming to reduce the under-five mortality rate by two-thirds between 1990 and 2015.

To be launched on 10 March 2014, a new UN Women report, Hearts & Minds: Women of India Speak, sheds light on this important issue by sharing the stories of Bhuri Bibi and other women. 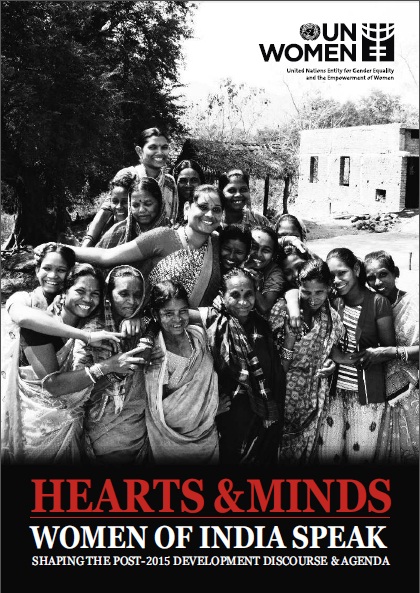 Shunned: A mother and daughter’s struggle to survive

“When he finally abandoned me, I was already expecting again, although I was not aware of it then. I was staying at my mother’s home when my daughter was born and this time the baby survived, maybe because I was not beaten and tortured during pregnancy,” Bhuri Bibi reflects, in the report.

Although her husband and family shunned her and her newborn daughter, she was able to find the support and care she so desperately needed in her mother. But just as she thought her life was finally turning around, her mother passed away, leaving Bhuri Bibi to live in a house with her brothers. They tried to force her to leave by inflicting more violence upon her. After her persistent refusal to leave the house, the brothers agreed to give Bhuri Bibi and her daughter a small space in the home.

“I take my daughter with me wherever I go, as I don’t trust anyone… I’ll never let her out of my sight,” she says. “I really hope that I get money to build a small dwelling for her and myself to live peacefully.”

As victims of domestic violence, Bhuri Bibi and her daughter are now particularly vulnerable to economic and employment-related disadvantages. Their future is unclear, but Bhuri Bibi’s maternal protective instinct will go far. Her experiences with domestic violence and its impact on child mortality have hit her hard, but she still believes in a happy future for her and her daughter one day.

India has a Gender Inequality Index ranking of 132 out of 148 countries in 2013, according to UNDP’s Human Development Report. Its child sex ratio (the number of females per thousand males from 0 to 6 years of age) has declined rapidly in recent years – meaning fewer girls are being born. According to the 2011 Census, from 927 girls for every 1000 boys in 2001, the ratio has dropped to 919 girls in 2011.

In India, as well as in several other countries of Asia, female infanticide and son preference based on deeply rooted patriarchal cultural and religious beliefs has been pervasive for centuries. According to a study conducted by the International Centre for Research on Women and UNFPA’s Asia Pacific Regional Office, “women experience intense societal and familial pressure to produce a son and failure to do so often carries the threat and consequences of violence or abandonment in their marriage.” The study says the advent of prenatal diagnostic technology since the mid-eighties has also made it easier to practice pre-natal sex selection and subsequent sex-selective abortions.

“In India, UN Women tackles domestic violence and son preference by working with elected women representatives and other women in villages across five states. We encourage them to speak of their concerns and increase their participation in local decision-making through panchayats (village councils) and gram sabhas (public village meetings),” says Rebecca Reichmann Tavares, Representative of UN Women’s Office for India, Bhutan, Maldives and Sri Lanka.

Between 2011-2013, UN Women trained 800 female motivators to encourage other women to participate in special meetings meant only for women or mahila sabhas, where they spoke about domestic violence as well as other social issues such as alcoholism, dowry, sex selection and child marriage. Over the same period, 6 million women participated in 1,172 Gram Sabhas, 5,163 ward sabhas and 3,179 mahila sabhas (women’s meetings at different local levels).

Related News
24/12/2012
Confronting dowry-related violence in India: Women at the center of justice
08/06/2022
A comprehensive approach to ending violence against women in rural spaces in India
27/05/2020
On the front lines of COVID-19, women’s organizations provide vital services as first responders as violence against women spikes
14/11/2018
In India, women boycott weddings with child brides
09/11/2018
From where I stand: “I saved a life”
END_OF_DOCUMENT_TOKEN_TO_BE_REPLACED