Suva — The Markets for Change (M4C) project, which officially launched at Suva Municipal Market in Fiji on 29 April 2014 is a key component of UN Women Pacific’s Women’s Economic Empowerment programme. The project’s goal is to ensure that marketplaces in rural and urban areas in Fiji, Solomon Islands, and Vanuatu are safe, inclusive and non-discriminatory, promoting gender equality and women’s empowerment. 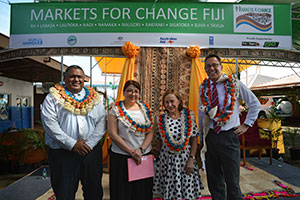 The bulk of the funding for the six-year, multi-country initiative has been provided by the Australian Government’s Department of Foreign Affairs and Trade, with USD 4.6 million earmarked for Fiji, USD 2.9 million for Vanuatu and USD 2.5 million for Solomon Islands.

Marketplaces are key sites for economic activity in Pacific Island countries and territories and while they may initially seem small-scale, they are not only central to the livelihoods of many households, they also make a significant contribution to individual countries’ gross domestic product. Vendors, especially women, face numerous day-to-day challenges in their workplaces – the hours are long, the profits are low and violence against women is widely reported.

Related News
29/08/2014
Markets set to improve with Pacific women in the lead
10/06/2020
Across the Pacific, crisis centres respond to COVID-19 amid natural disasters
07/11/2017
In the words of Varanisese Maisamoa: “We want to empower our market vendors to be climate resilient”
13/10/2017
Markets for Change addresses barriers to women’s economic empowerment in Solomon Islands
12/10/2017
Coverage: UN Women Deputy Executive Director in Solomon Islands
END_OF_DOCUMENT_TOKEN_TO_BE_REPLACED