Remarks by UN Under-Secretary-General and UN Women Executive Director Phumzile Mlambo-Ngcuka at the Noon Briefing of the Spokesperson of the Secretary-General, 26 June 2014.

Today we are celebrating the start of our campaign to commemorate the 20th anniversary of what is still the most comprehensive affirmation of women’s rights and empowerment: The Beijing Declaration and Platform for Action, adopted in 1995 by 189 Member States at the Fourth World Women’s Conference in China. 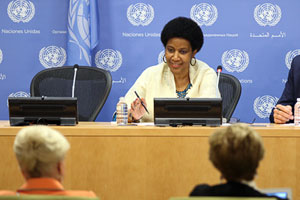 To do so, we are taking the UN outside our offices to the community and people where it will always belong, for an evening of reflection, celebration and performance.

I hope many of you have RSVP’d so you can join us at the Apollo Theatre today at 5 p.m., in Harlem. The Apollo itself has been at the heart of the community struggles and bold activism.

We also know that the vision laid out in Beijing, with 12 critical areas of concern for women, still resonates deeply around the world.

The focus areas address important matters such as:

Today we are reaching out to the people of the world to draw attention to the unfinished business of the Beijing Platform for Action. This unfinished business is marked by continuing violations of women’s rights, including a pandemic of violence against women and girls.

Today we continue to press for the release of the Nigerian girls who were abducted more than two months ago by extremists.

Today I and UN Women are shocked by the murder of the Libyan leader and women’s rights advocate Salwa Bugaighis. We mourn the loss of a sister and a courageous human rights defender. UN Women condemns this assassination of a woman who was brave to lead and advocate for the human rights of her people.

For Salwa and all women and girls, we will keep standing strong and taking action for women’s rights, gender equality and women’s full and equal participation as outlined in the Beijing Platform for Action.

Since we kicked off our Beijing+20 campaign online a few weeks ago, we have reached a global audience of 40 million, with media, civil society organizations and individuals actively engaged in a re-energized conversation. We want to reach many more.

We are now calling on people in all corners of the world to join us offline, too, in discussions, rallies or exhibitions and in action.

Over the next year, UN Women will be hosting global events on the critical areas of concern detailed in the Beijing Platform for Action to deepen the debate and action.

Member States are busy with reviews as we speak and almost 90 have sent in their country reviews. In addition, by the end of this year, regional economic commissions will have completed comprehensive reviews in all the regions on all 12 critical areas.

In addition, we will have events worldwide with Member States, cities, civil society on different critical areas.

In Santiago, Chile, with the Government of Chile, we will focus on women and political participation and leadership.

In Kigali, Rwanda, with the International Trade Centre, we will focus on women’s economic empowerment.

In New Delhi, India, we will focus on engaging men and boys as partners in gender equality with the Men Engaged Alliance.

In Seoul, South Korea, with UNESCO, we will focus on women and girls and education and training.

Here in New York, we will hold the formal global review of the Beijing Platform and we will have large-scale celebration in March 2015 during the Commission on the Status of Women.

The campaign will culminate in a High-Level commitment event at the United Nations General Assembly in September 2015.

These are some of the many events that will take place in every region of the world.

Beijing+20 takes place at an important time as UN Member States define the future that we want for 2030. The Open Working Group for the Sustainable Development Goals has proposed a goal to achieve gender equality and empower women and girls everywhere by 2030.

For the first time gender inequality will have an expiration date! This is going to be a big part of our work plan so that we can help the world realize the 2030 vision.

We want to emphasize that the Beijing agenda is not a women’s agenda. It is an agenda for humanity.

Implementing the Beijing agenda will dominate our work and we want it to dominate everybody’s work as part of the Sustainable Development Goals, so that ending gender inequality is everybody’s core business.

I am sure you can agree with me that this is a huge task, but not Mission Impossible especially if the media, men and youth join us and take a stand. I believe this is the mission of our time and your time as well.

In Harlem today, we will ask people to participate in the local, national and regional activities and reviews and I will highlight the need to unite for  the future we want for women and girls 2030.

This is the focus and action that we want for the coming years. As the title of our Beijing+20 campaign says: Empowering Women, Empowering Humanity, Picture it!

Related News
Ask an activist: Twenty-five years since the adoption of Beijing Platform for Action, how far have we come, and is the Platform relevant for young people?
UN Women Executive Director condemns assassination of women's rights activist in Libya
“We count on your leadership to tackle the barriers that remain for Arab women” says Executive Director at Beijing+20 regional review
In the words of Hajer Sharief: “Peacebuilding is not only about stopping violence, it is also about the prevention of violence”
In the words of Alaa Murabit: The overlooked tool in efforts to prevent conflict
END_OF_DOCUMENT_TOKEN_TO_BE_REPLACED