Climate action now: Why there's no time to lose

It’s real. It’s happening. It’s changing the world as we know it, and there’s no time to lose.

Climate change will affect us all – from the wealthiest countries to the poorest, from the smallest of islands to whole continents. But its worst impact will be felt by the world’s poorest and the most vulnerable, especially poor women and girls. 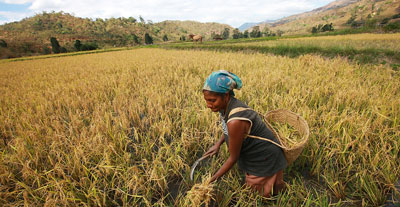 We know what we need to do to avoid a catastrophe: reduce carbon emissions; transition to clean, renewable energy; and ensure that the global temperature rise is less than two degrees Celsius. And we must ensure that our efforts towards mitigation, adaptation and resilience in the face of climate change include women’s voices, perspectives and leadership. I recently attended the Small Island Developing States Conference in Samoa, where it was clear how powerful a role women – as leaders, farmers and first responders – can and must play in efforts to mitigate and adapt to climate change.

So what’s holding us up? Lack of political will and consensus about how to get there.

In the meantime, most of the 3.3 million deaths from climate disasters in the last 40 years have been in poorer nations and more women die in climate disasters than men. A survey conducted by Oxfam in Indonesia after the 2004 tsunami found that in the worst impacted village, up to four women died for every male. Lack of access to information and resources, cultural restrictions and entrenched inequality make women and girls even more vulnerable to climate risks than their male counterparts.

Declining crops and rising food prices are already impacting the world’s poor. Women and girls, and female-headed households are taking the hardest hit.

In developing countries, women and girls bear the primary responsibility for water collection. They have to walk farther and work harder to collect water and fuel. In sub-Saharan Africa, women and girls spend an estimated 16 million hours fetching water every day. The time spent on gathering water, fuel and food keeps women and girls from accessing education.

Women and men are experiencing, and will continue to experience, climate change differently. But women can be the game changers in reducing the impacts of climate change.

The Beijing Declaration and Platform for Action, the international roadmap on women’s rights adopted by world leaders in 1995, recognized the critical role that women play in protecting the environment.

Women have proven skills in managing natural resources sustainably and adapting to climate change, and are crucial partners in protecting fragile ecosystems. Indeed, if we are serious about tackling climate change, we must ensure that women are equal partners and drivers of environmental decision-making.

The upcoming UN Climate Summit on 23 September is a chance to change our stance on climate change, once and for all. We need bold actions, ambitious new targets to reduce emissions and strong political will to combat climate change. We need to recognize and strengthen women’s contributions to climate change mitigation, adaptation and resilience.

At the summit, UN Women and the Mary Robinson Foundation are co-hosting a “Leaders’ Forum on Women Leading the Way: Raising Ambition for Climate Action,” to highlight women’s leadership in climate action and to open a participatory inter-generational dialogue on climate change between women leaders and youth.

Climate change impacts are inevitable at this point, but if we act now, they may not be irreversible. Lives can be saved, economies can be made sustainable, the planet can be greener and societies can be more equitable. So let’s do everything we can to adopt climate-resilient pathways to sustainable development and commit ourselves to the pursuit of equality between men and women in every corner of the world.

This article was originally posted on LinkedIn