Adjusting the frequency: Women on the airwaves

As World Radio Day is observed globally, we highlight how UN Women and the World Association of Community Radio Broadcasters are raising awareness of critical issues through a series of co-productions for the Beijing+20 anniversary.

An intruder breaks into a mechanical engineering class at Montreal’s École Polytechnique…
He orders the men to leave the room and asks the women if they know why they are here…
These women are future engineers…
But to the killer, these are feminists who need to be fought…
He pulls out his rifle and kills 14 women...”

This mournful and gruesome scene pulls the audience into the radio podcast Feminisme d’hier, égalité d’aujourd’hui? (Yesterday’s feminism, today’s equality?), aired in French on Montreal radio station CIBL 101.5. Three high-ranking professional women in construction, politics and the business secto) discuss that question and assess Quebec’s societal progress 25 years after the massacre. The discussion revolves around key questions: how has the women’s causes changed; are women accessing decision-making roles; are they more equal today? 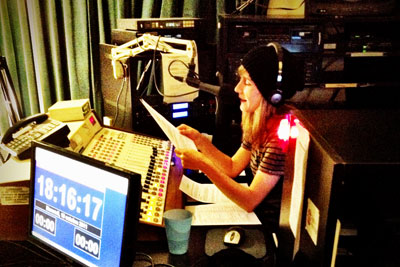 Karine Poirier hosts a community radio programme on CIBL 101.5 FM in Montreal, Canada, in 2011. She is now Project Officer at the Montreal headquarters of the World Association of Community Radio Broadcasters. Photo: Sylvain Quidot

The radio story is part of On the road to BEIJING+20, an international radio campaign of 20 stories, born out of UN Women’s long-standing partnership with the Association Mondiale des Radiodiffuseurs Communautaires (AMARC), also known as the World Association of Community Radio Broadcasters.  The campaign features an audio series offering a comparative perspective between 1995 and 2015. Many of AMARC’s producers reported from the historic Fourth World Conference on Women in Beijing in 1995. Today they are part of AMARC’s Women’s International Network and are steering the joint productions with UN Women.

Globally, over two billion people live on less than USD $2 a day, and for them radio is a vital source of communication. Community radio expands dialogue from the villages to the cities, offering opportunities to community members to participate in programming, managing and ownership of stations, using technology appropriate for local producers.

UN Women’s long-standing partnership with AMARC focuses on expanding the conversation on women’s rights at the grass-roots level. Founded in 1983, AMARC, an international NGO, has almost 4,000 members in 130 countries. As the only international organization of community radio broadcasters, AMARC leverages its platform to bring women across the world to share their stories via radio.

Broadcasting a new production through community radio stations and online every Monday morning, in its original language, On the road to BEIJING+20 will be on-air across the world through AMARC’s broadcasting partners. It is expected to reach over 47 million listeners over the campaign period.

“Radio is ever-present. It gives a voice, educates, allows you to share knowledge,” explains Karine Poirier, Montreal-based Project Officer at AMARC. She says involving women in radio is crucial. “It’s a question of diversity and women need to be given that place too.”

The goal of this series, running from January to July 2015, is to enhance the understanding of the main issues laid out in the Beijing Platform for Action and to mobilize community members to refocus the discussion around these themes, which play a vital role in their everyday lives.

“The uniqueness of this radio series is that it is based on the voices of grass-roots women, speaking on issues that people grapple with every day from economic opportunities to the importance of education to young girls. It provides an important contribution to the debate, articulating a reality check on what is taking place on the ground,” says Nanette Braun, Chief of Communications and Advocacy, UN Women.

Through documentaries, interviews, commentaries and personal features, this series ensures that women are at the centre of the narrative, addressing a breadth of topics, including domestic violence; professional and economic empowerment; gender diversity; participation in media; access to education; preserving the environment; among others. 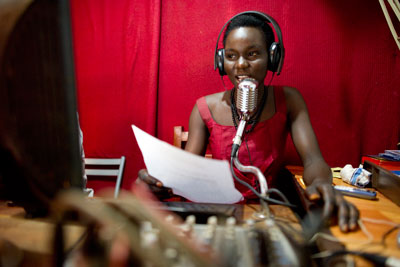 Other stories co-produced by AMARC and UN Women