This year, World Radio Day is focusing on gender equality and women’s empowerment in radio. Learn how UN Women is leveraging the power of air waves to amplify women’s voices.

“Gender equality and women’s empowerment in radio” is the theme for World Radio Day, 13 February 2014.

Mobile and inexpensive, the popularity of the radio medium remains high and accessible, especially in remote rural communities and for marginalized communities, many of them poor, illiterate and women.  UN Women has been leveraging the power of radio to amplify women’s voices and reach far-flung communities. 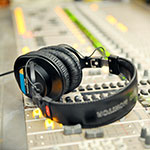 From Georgia to Sudan, UN Women is providing training courses for journalists on gender mainstreaming and other skills, to support the efforts of women like Intisar Ginded, whose radio show Women and Society informs and spreads seeds of hope. A mother of one, the pursuit of peace in Darfur is an ideal she strives for.

“As a young girl, I had a burning ambition to work as a broadcaster. I knew it was the only profession that would allow me to directly talk to my community,” said Intisar. “It would allow me to exchange information and ideas. Nothing was going to stop me from realizing my dream.”

For Intisar, whose name means “triumph” in Arabic, working as a broadcaster helps her to shed light on the issues that affect the people of Darfur, especially women and children, who bear the brunt of the perennial conflicts. 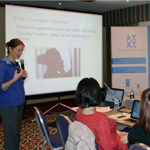 In Georgia, at a recent training in January, 21 journalists discussed gender-sensitive reporting and violence against women issues.

“I have been covering gender-related issues for many years and even attended several trainings,” said Eka Kevanishvili, a journalist at Radio Liberty. “Nevertheless, I must admit that these three days were an eye-opening experience. The training reminded me of the things that I, as a journalist, should never do and the high responsibility for the things we write. … I feel an even stronger desire to continue covering these issues after the training.”

Through a partnership with the leading international network of community radio broadcasters, the World Association of Community Radio Broadcasters (AMARC, by their French name)— a coalition of over 4,000 community radio producers working at the rural and grassroots level— UN Women is supporting women community radio producers as they tell the stories of their peers. UN Women co-produced a series of 20 radio stories on grass-roots efforts to end violence against women. From Burkina Faso to Chile, from Nepal to Morocco and the Czech Republic, the voices of organizers and survivors are heard from many corners of the world, telling how their communities are addressing violence against women and girls.

AMARC also builds capacity of women producers in community radio, giving a voice to people who are usually excluded from mainstream media, through community participation in the programming. 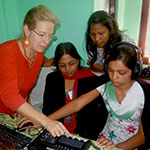 “Community radio can give women a public voice, enable their participation in public debates and let them voice their issues and concerns. Information is power!” says Bianca Miglioretto, Vice-President of the Women’s International Network of AMARC, Asia Pacific Chapter. She works to introduce radio technologies to community radio producers.

“In technical trainings, before explaining the mixing console, I usually ask women if they know how to cook a curry or a cake,” says Miglioretto. “Most women say, ‘yes it is easy.’ So I tell them mixing a recording is even easier.”

UN Women’s Knowledge Gateway is also working with Community Champions, some of whom are radio broadcasters. Working from Bahamas to Nepal, they are advocating for women's economic empowerment through the air waves. Tune in!

by BenStanford.
Explore more infographics like this one on the web's largest information design community - Visually.
Related News
01/05/2015
Reading between the lines: Moldovan journalists embrace balanced reporting
09/07/2021
I am Generation Equality: Mete Belovacıklı, advocate for gender equality in media
03/03/2020
I am Generation Equality: Subina Shrestha, journalist and filmmaker
12/02/2016
Radio airwaves amplify “On the Road” since Beijing
23/11/2015
Press release: Progress for women in news media grinds to a halt
END_OF_DOCUMENT_TOKEN_TO_BE_REPLACED