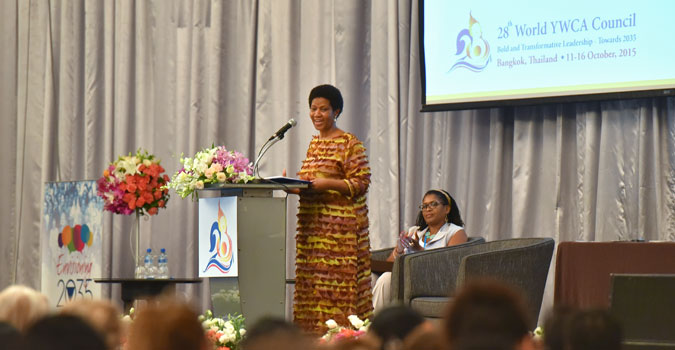 Bangkok — On 16 October, United Nations Under-Secretary-General and UN Women Executive Director Phumzile Mlambo-Ngcuka attended a remarkable event in Bangkok organized by the YWCA to expand the advocacy on gender equality and women’s rights and symbolically pass the torch to the next generation of feminists.

“We must be single-minded about the fact that change for women and girls more than ever before is possible in our lifetimes,” she said in her speech. “By 2035 we should report ‘mission accomplished’ because the gender equality mission is possible.”

Ms. Mlambo-Ngcuka joined more than 500 delegates from some 70 countries of the Young Women’s Christian Association (YWCA), one the world’s largest and longest-established networks of women and girls working for justice, peace, health and human dignity, who gathered in Bangkok, Thailand, to endorse a new forward-looking “Envisioning 2035 global goal” at the organization’s 28th World Council.

“Our decision today will impact 100 million young women and girls by 2035, and also as the World YWCA elected a board with 60 per cent young women under the age of 30,” said Nyaradzayi Gumbonzvanda, General Secretary of World YWCA, at the endorsement of their global goal.

Later that day Ms. Mlambo-Ngcuka joined the UN Women–YWCA co-organized media roundtable where she highlighted the YWCA and UN Women view on the “game-changing elements” that guarantee gender equality a lived reality. Those include the elimination of discriminatory and customary laws that violate the human rights of women, preventing and responding to violence against women, achieving equal representation of women in decision-making, and girls’ education beyond the primary level.

To achieve “Planet 50-50 by 2030,” Ms. Mlambo-Ngcuka said alliances and coalition-building in feminist advocacy and political engagement are critical. Youth, who are at the core of the fundamental structural changes being pursued, must be deeply engaged. Right now more than half the world’s population is under 30.

Other Media Roundtable panelists—which included senior YWCA officials and Kim Simplis Barrow, First Lady of Belize, the country’s Special Envoy for Women and Children, and Global Ambassador for the Special Olympics—echoed that the representation of young women in decision-making bodies is essential to achieve the United Nations’ new Sustainable Development Goals (SDGs).

Closing the Executive Director’s one-day mission, UN Women in Thailand convened a Civil Society Dialogue on Gender and Sustainable Development Goals, where she stressed that the SDGs are based on the principle of “leaving no one behind.”

Ms. Mlambo-Ngcuka underlined the plight of women migrant workers in particular, their living and working conditions and various forms of discriminations they face.

The SDGs include a stand-alone goal dedicated to achieving full gender equality and women’s empowerment. Ensuring women and girls play an equal role in all aspects of life is essential for achieving inclusive and sustainable growth and development. SDG 5, on gender equality, aims to end all forms of discrimination, violence, and harmful practices against women and girls. It also aims to recognize and value unpaid care and domestic work, ensure women’s full participation and equal opportunities for leadership in political, economic, and public life, and ensure universal access to sexual and reproductive health.