With support from UN Women’s Fund for Gender Equality, an association of rural indigenous women cheese and yogurt producers is growing, boosting incomes and economic independence.

At an altitude of some 3,000 meters above sea level, in the remote Peruvian town of Patachana, in Peru’s Andean region of Ayacucho, 65-year-old Quechua native and mother of Cira Huancahuari is busy making yogurt. Her determination to provide more for her 13 children drove her to develop the skills to produce cheese and yogurt. 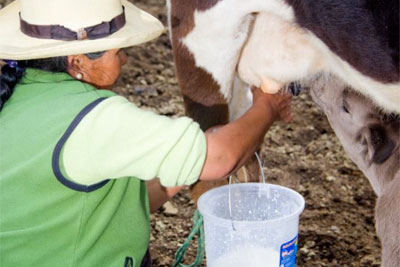 She now serves as President of a local dairy business supported by OMIL, the Association of Indigenous Women of the district of Laramate. What started as little more than an artisan workshop expanded to a much larger production with industrial machinery with support from UN Women Fund for Gender Equality grantee CHIRAPAQ (the Centre for Indigenous Cultures of Peru), which for more than 25 years has been promoting the rights of indigenous peoples, with a special focus on indigenous children, youth and women.

"We realized that by making cheese individually, each of us were not going to get too far,” said Ms. Huancahuari. “We had to do things differently, we had to create a quality product that characterizes our organization, our own brand. With joy and pride we have started positioning our cheeses and yogurt brand ‘Sanqui [a local Andean fruit used to flavour some of their yogurts].” Their new brand is a competitive, high-quality product, which has allowed the all-woman workforce to raise the prices of their products and gain access to new markets.

“Now the people of Laramate and visitors do not seek any cheese or yogurt products other than those we make with OMIL,” Ms. Huancahuari explained proudly.

She has been able to increase her income and economic independence, deciding how the money she earns will be spent. She says she and the women she works with are being recognized and respected for their success, not only by husbands and families, but by the community as a whole. 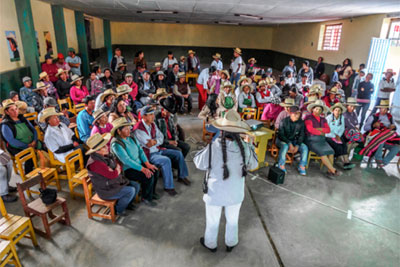 The number of cheese, yogurt and manjar manufacturers working at Cira Huancahuari's dairy business has drastically increased over the last two years as the community of workers has grown.  Photo courtesy of CHIRAPAQ.

As the community of workers has grown, so have the quantity and quality of production. In just two years, the number of cheese manufacturers has doubled from 10 to 20, and the number of yogurt manufacturers from six to 20. Another 15 women work on making manjar (a milk-based caramel also known as blancmange or dulce de leche). Sanqui’s production rates have responded to local demand, and increased from two litres of yogurt per week to eight, and from three two-pound cheese wheels a week to six.

“There are no jobs here,” explained 30-year-old Ayné Misaico Huaracc, a quechua native and mother of three from Patachana who produces yogurt through OMIL. “You plant seeds in your farm. If you have land, you grow potatoes or corn; nothing else. And you have to wait for the harvest to eat.”

Since getting involved in OMIL, her children can now drink fresh milk and she earns her own living. Proud of her accomplishments, she says: “I tell my husband: ‘don’t get used to me not asking you for money; you have to save money as well’.” 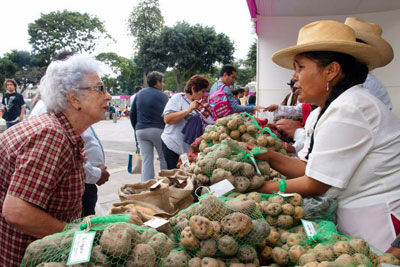 Quechua women are committed to local agriculture and grow potatoes in the Laramate region. Photo courtesy of CHIRAPAQ.

The production of dairy products has not been the women’s only entrepreneurial success. Committed to local agriculture, they have also started cultivating native potatoes in the Laramate region. Their first harvest was featured in a national fair in Lima in May. Promoted by Peru’s Ministry of Agriculture, the fair promotes the biodiversity of native potatoes in the Andean region. Most of the producers involved have years of experience and well-established selling and distribution points. It was a great learning experience and networking opportunity, and a first for the women from Lamarate district.

“[Participating in the fair] was an experience that gave me the confidence to think bigger and be sure that we are an organization that can get into different things if we work together,” said Ms. Huancahuari. “On that occasion we sold all the potatoes we brought and the first thing that was sold out was our cheeses. We’ve never had those kinds of revenues before.”

OMIL has become a key player for the economic empowerment of women in Laramate and, most importantly, a symbol of leadership and excellence.

“By providing greater support, and with the appropriate technical assistance and business advisory service, indigenous women can generate sustainable revenue for their families, and not just a pittance,” says Tarcila Rivera Zea, a Quechua leadera and President of CHIRAPAQ. “The scope of this initiative should inspire significant investment in capacity building, for it to have a larger ripple effect.”

As Ms. Huancahuari puts it: “We learned, we know the way forward… that gives me joy and drives me to keep working.”

Read our In Focus section on Rural Women 2015

Related News
10/06/2016
From child labourer to women’s rights defender
08/08/2013
International Day of the World's Indigenous Peoples
10/09/2019
In the Bolivian Amazon, women are protecting the forest and empowering themselves
15/07/2019
The simple scheme that’s driving a quiet revolution for Brazil’s family farmers
10/01/2019
From where I stand: “Yanouh cooperative increased my income and freedom of movement”
END_OF_DOCUMENT_TOKEN_TO_BE_REPLACED