Breaking down barriers: bringing women with physical and motor disabilities into view

For Cristina Francisco Reyes, wounded by a bullet in the Dominican Republic when she was 9 years old, the desire for things and the world of people with disabilities to change gave her the impetus to carry out the work that she has done for more than 25 years in the country. She participates actively in sports facilities for people with physical and motor limitations and has joined forums that promote primarily the social inclusion and participation of people with disabilities and their human rights. 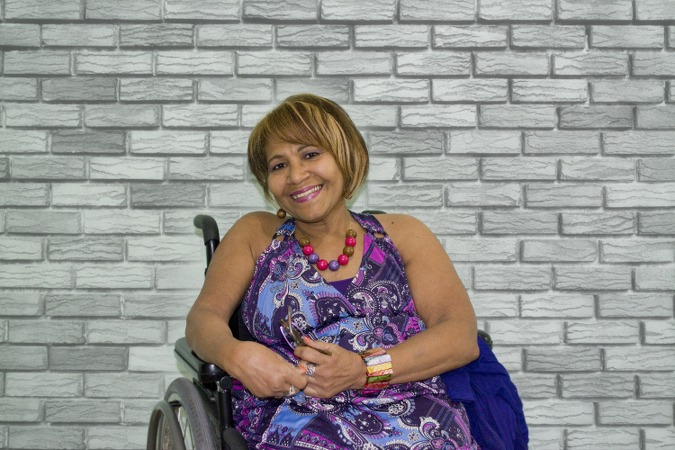 Cristina Francisco Reyes is a leader and activist for women living with disabilities in the Dominican Republic. Photo: Geovanny Almonte Escobal

At 9 years of age, Cristina Francisco Reyes was playing with her twin sister Clara and other children, when a stray bullet hit her in the back, injuring her spinal cord and leaving her paraplegic.

In the Dominican Republic at the time there were greater stigmas, numerous physical barriers, little information and little awareness with regards to people and children living with physical and motor limitations. Cristina’s inner strength led her to want to do something for women in the same situation.

Her desire for change gave her the impetus to carry out the work that she has done for more than 25 years in the country, actively participating in sports facilities for people with physical and motor limitations and then joining forums that promote primarily the social inclusion and participation of people with disabilities and their human rights. Cristina has also been politically active, founding the Club for People in Wheelchairs and the Association of Persons with Physical-Motor Disabilities (ASODIFIMO), and creating the first forum dedicated to women with disabilities, called the Circle of Women with Disabilities (CIMUDIS).

Today, Cristina feels one of her greatest achievements in life has been, besides having had her daughters, the creation of the Circle of Women with Disabilities (CIMUDIS). She says today more women with disabilities know their rights and have the capacity to demand them, and to have a presence in some decision-making forums in order to talk about subjects such as the sexual and reproductive rights of women with disabilities. The ability to break down structural and physical barriers—particularly those that are invisible and rejecting discriminatory attitudes towards women with disabilities—keeps her motivated to remain at the forefront of CIMUDIS together with her colleagues.

What were the greatest obstacles you faced to be able to be politically active in, and make visible, the situation of women with disabilities and to achieve your political participation?

One of the main obstacles faced, which is still very generalized and persistent, is that women with disabilities are stigmatized and labelled as “ill”, seen as being incapable of developing leadership, of having an impact and influence on achieving the social changes necessary for equity, our equality and our political participation. Today, obstacles still persist: the absence of information, the lack of support from family members and friends to enable them to participate in political processes—even to study and take different forms of transport.

Read the full interview on UN Women’s regional website for Latin America and the Caribbean: http://lac.unwomen.org/en/noticias-y-eventos/articulos/2015/05/entrevista

Disclaimer: The views expressed here are of the author and may not necessarily reflect those of UN Women.

Related News
29/05/2018
Running for a cause in Mexico
06/08/2016
“We are carrying the torch for women and girls all over the world” – Executive Director
09/03/2016
From where I stand: Cristina Francisco Reyes
16/02/2016
Strengthening the capacity of networks of women with disabilities on humanitarian action
11/12/2015
Let’s equal the playing field for women in sport
END_OF_DOCUMENT_TOKEN_TO_BE_REPLACED