New York – With participants ranging in age from 10 to 79, UN Women hosted a full-day intergenerational dialogue on 13 March aimed at creating a space to connect up-and-coming gender equality activists with veterans to develop new strategies to achieve gender equality by 2030. One of UN Women’s flagship events at the 59th Commission on the Status of Women (CSW), the dialogue brought together women and men, girls and boys of all ages, indigenous groups, private sector and media representatives, LGBTIQ groups, and civil society organizations from countries across the globe.

Highlighting progress made and remaining changes on this 20-year anniversary of the Beijing Declaration and Platform for Action, the dialogue addressed the 12 critical areas of concern and more, through panel discussions, group work and storytelling – an innovative format to introduce new ideas by people who have been impacted by the Beijing Platform for Action and the ongoing struggle for equality. 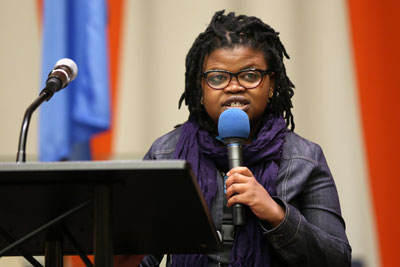 Kwezilomso Mbandazayo, a young woman from South Africa, told her story about being defined by her external self, her gender, her race, and the violence and discrimination she experienced. She stressed the impact of being denied prizes in school, being treated differently for looking different and the greater susceptibility of girls and women to violence. “Authentic, non-pretentious dialogue will move us, will get us somewhere,” she said, when asked about her motivation for taking time off from school to attend CSW.

Using many participatory formats, the event engaged speakers from all walks of life, from 16-year-old Lacy, a young activist anxious to “remove the negative connotations and social stigma associated with being a feminist”, to Gramata, a 79-year-old woman from Venezuela who has “seen it all”.

Gramata spoke of her struggles, raising her children in poverty as a single mother, knowing that even without enough money for food she preferred to send her three children to school instead. “I am here [at CSW] to make sure that my grandchildren grow up in a world that knows no boundaries for women and girls,” she said. I want my granddaughters to have good jobs, decent jobs, and not have to rely on men to provide for themselves. Young people have to work to change the conditions for women just as we did 20, 30 and even 40 years ago,” she added. 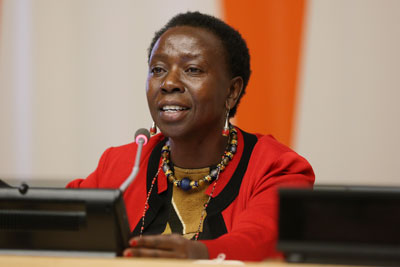 Financing for women’s issues throughout each generation was a top priority in the discussion. One of the veteran panelists who attended the World Conference in Beijing was Kenyan human rights advocate Musimbi Kanyoro, who is today President and CEO of the Global Fund for Women. She stressed that the sustainable development goals and the post-2015 development agenda must take care to include adolescent girls and maintain the focus on women’s human rights. “With finances, if something is not named, it cannot be financed, it cannot be budgeted for. We must name things like women’s human rights to ensure their inclusion.” 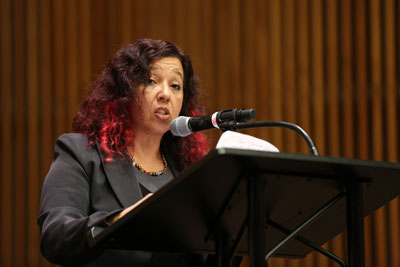 A former presidential candidate from Paraguay, 52-year-old Lilian Soto highlighted the similarities between running for her school’s student council as a young woman, and the challenges of being a woman in politics today – of their personal lives being scrutinized rather than their work and policy proposals. Rallying other women and girls, she concluded: “The inclusive and strong feminist movement will continue.” 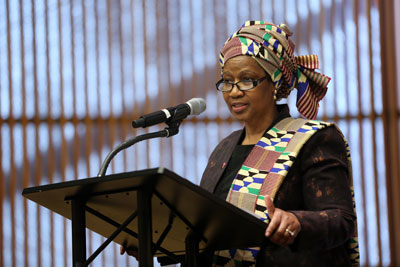 Phumzile Mlambo-Ngcuka reiterated to those in attendance that collaborating with youth leaders is key to fighting patriarchy. Photo: UN Women/Ryan Brown

In her speech, UN Women Executive Director Phumzile Mlambo-Ngcuka reminded all participants of the need to work with youth leaders to combat patriarchy. “Young women need us to support them, but young people and young women also are leaders in their own right. They are making fundamental changes in their own lives and they are raising the bar for others. … This situation has to change for everybody. This is about breaking the walls of patriarchy brick-by-brick, not surviving within patriarchy.”

Related News
“In 2030 we want to be able to talk about a world that has achieved gender equality” – UN Women Executive Director
“The clear objective of our time is parity' rooted in women's empowerment” – UN chief Guterres
Remarks by Under-Secretary-General of the United Nations and Executive Director of UN Women, Phumzile Mlambo-Ngcuka at the Town Hall with Civil Society and the United Nations Secretary-General
“We urge you to place gender equality and women’s empowerment at the heart of the Financing for Development discussions and negotiations” – UN Women Executive Director
Post-Beijing voices
END_OF_DOCUMENT_TOKEN_TO_BE_REPLACED