Sujita and her 5-year-old son Jenif lost their home in Khokhana town at the outskirts of Kathmandu. In Khokhana, many people lost their family members and homes after the earthquake and now live in overcrowded tents. Locals are afraid to go back to their homes because of the aftershocks. Photo: UN Women/Vlad Sokhin

“As a result of the earthquake, we are all suffering,” said Pragita Tuladhar, a volunteer from a women worker’s organization, SABAH. During this period of national crisis, she says she has been moved and inspired by the outpouring of solidarity, particularly among women. “It is a great experience that women are gathered here to help other women in times of such suffering. There are so many women that are living without food, water, and home at the moment. They are all out there in open and I am happy that I can help them at this time.”

During times of natural disasters and conflicts women and children often bear the brunt of the crisis. According to UN reports5, they are more vulnerable to rape, sexual exploitation which greatly increases the likelihood of unwanted pregnancies, sexually transmitted diseases and complications for reproductive health. In Nepal, after the earthquake, approximately 40,000 women are estimated to be at an immediate risk of suffering gender-based violence.6

Disadvantaged women such as those with disabilities, the elderly and those from female-headed households, are often the last to receive aid. Social norms, lack of information, long walking hours and burden of household chores are often factors that affect their access to aid. 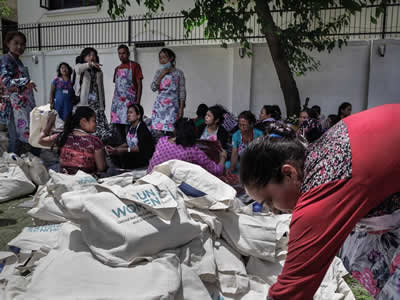 A hundred dignity kits have been provided to the Women and Children Officers in both Sindhupalchowk and Kavre districts. A further 100 kits are being distributed to three women’s organizations to distribute to women with disabilities, elderly women and female-headed households in five affected districts of Kathmandu, Sindhupalchowk, Kavre, Nuwakot and Gorkha. More than 30 volunteers from UN Women partner organizations that focus on excluded women – such as Pourakhi (an organization for migrant women workers) and SABAH (an organization for home-based workers) – are putting together these dignity kits. These women volunteers are determined to be on the front lines, actively involved in relief efforts.

“My home and farm land is completely damaged. Although my home in my village is destroyed, I am fortunate that I am currently employed and my son is safe with me,” said Nirjala Pokhrel, a volunteer from Pourakhi. “There are so many women in the villages that are affected by the earthquake. As a woman who has survived the earthquake, I understand their needs.”

“The dignity kits will be provided to the most vulnerable women whose lives have been devastated because of the earthquake. These are women that are disabled, elderly and those that come from women-headed households,” said Sandhya Singh, a Women and Child Development Officer with Sindhupalchowk District. “Today, women in villages in Sindhupalchowk have no clothes or even other items with them, it is all buried under the debris.”

UN Women has put out an appeal of USD 1.5 million to reach 40,000 women whose protection is at risk in Nepal. UN Women and national women’s groups are working to support protection systems, to prevent and respond to violence and gender-based violence against women, particularly among displaced populations. This includes the creation of multipurpose safe spaces, to provide trauma counselling, psychosocial support and life-saving information, while seeking to strengthen multi-sectorial services and referral systems for earthquake-affected women survivors of violence. 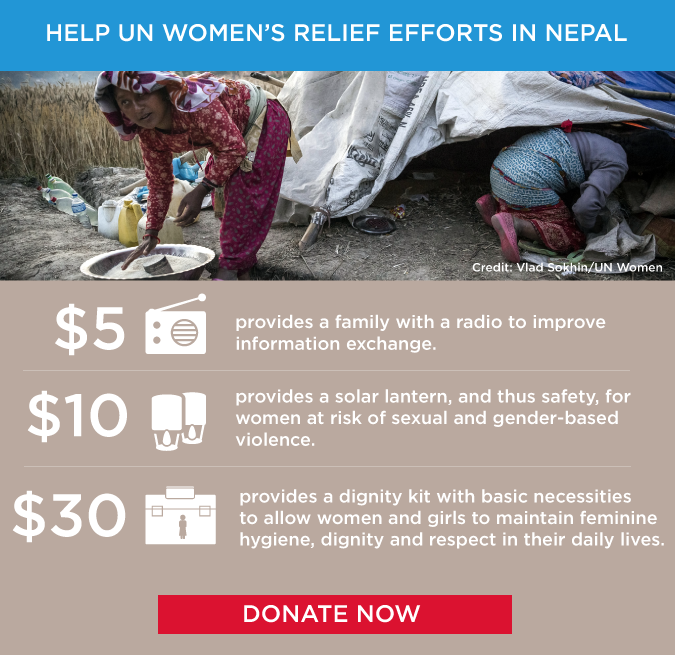 To channel donations to UN Women’s specific efforts around protection of women and girls, donations can be made to UN Women.

2 Based on figures from the National Census 2011

3 According to the UN Situation Report No.9 (as of 2 May 2015), the 13 most affected districts include Bhaktapur, Dhading, Dolakha, Gorkha, Kavrepalanchwok, Kathmandu, Lalitpur, Nuwakot, Ramechhap, Rasuwa, and Sindhupalchwok, Makawanpur and Sindhuli.

5 Report of the Secretary-General on Gender equality and the empowerment of women in natural disasters. 20 December 2013.

6 According to estimates provided in the UN Flash Appeal, available at http://un.org.np/sites/default/files/nepal_flash_appeal_1.pdf

Related News
01/10/2021
Comprehensive relief package provides support to women and excluded groups during the COVID-19 pandemic in Nepal
13/04/2020
From where I stand: “I want to hug my daughter and take care of my parents, but this sacrifice needs to be made to keep them and others safe”
02/08/2016
Healing in post-earthquake Nepal
02/05/2016
UN Deputy Secretary-General visits UN Women multipurpose centre in Nepal
24/04/2016
Speaking the same language in post-disaster Nepal
END_OF_DOCUMENT_TOKEN_TO_BE_REPLACED