Africa must rise with and through women, says UN Women Executive Director

While attending the 25th African Union Summit in Johannesburg, UN Women Executive Director Phumzile Mlambo-Ngcuka called on both the public and private sector to invest in women in order to achieve sustainable development in Africa.

The Executive Director said that although there has been progress in some areas since the adoption of the Beijing Declaration and Platform for Action 20 years ago, there is still work to be done in order to achieve gender equality and women’s empowerment. 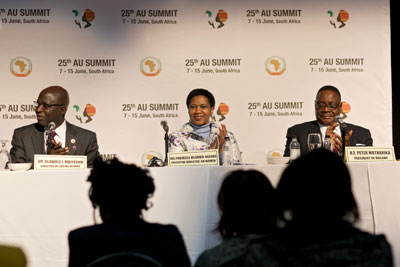 UN Women Executive Director Phumzile Mlambo-Ngcuka (centre) met with several Presidents and high-level representatives at the AU Summit, and took part in a press conference on ending child marriage, alongside the President of Malawi, Peter Mutharika (on the right). Photo: UN Women/Monika Bihlmaier

“Africa must rise but it cannot do so without including half of its population in the quest for development.  The empowerment of women and girls has the potential to boost economic growth and aid in Africa’s pursuit for inclusive sustainable development,” she said.

UN Women and the Austrian Government co-hosted a breakfast meeting where partners from government, civil society, private sector and the development community reflected on changing the narrative on women’s empowerment in Africa – recognizing the transformative work and successes that need to be celebrated and shared.

The Executive Director noted the improvement in girls’ education enrolments while emphasizing the need to now focus on quality education, retention and secondary education. Women’s participation in the economy is high, but with 75 per cent of women in the informal sector where they are unprotected and have no minimum wage. To this effect, Ms. Mlambo-Ngcuka called for accelerated action and investment in girls’ and women’s education, going beyond primary school to tertiary levels.

The Executive Director noted that it is imperative to close the gender funding gap by ensuring that there is gender-responsive budgeting by governments and the private sector. She further called for strong commitment to financing for gender equality in the outcome document of the Third International Conference on Financing for Development, to take place in Addis Ababa, Ethiopia, from 13-16 July 2015.

Ms. Mlambo-Ngcuka was a co-panelist at a press conference with H.E. Peter Mutharika, President of Malawi; H.E. Nkandu Luo, Minister of Gender in Zambia; and Nyaradzai Gumbonzvanda, Goodwill Ambassador for the African Union on Ending Early Marriage. She noted that 15 out of 20 countries where this practice is rampant are in Africa.

“Early marriage has devastating consequences. It is not only a human rights violation but it triggers a whole series of other violations. A girl married before age 18 will probably not enjoy her right to an education or to health. She may be more vulnerable to violence, and less likely to find decent work. These are consequences that reverberate throughout a lifetime,” she said.

She emphasized the need to have laws that prohibit child marriage, but more importantly for the laws to be enforced. African leaders took a tough stance on the issue of child marriage, with the AU delivering its formal position at the Summit (all adopted resolutions are expected to be made public next week). 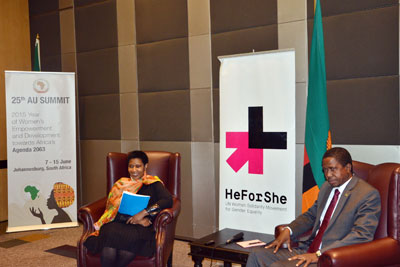 President of Zambia, H.E. Edgar Lungu, signed on to UN Women’s HeForShe campaign, a commitment to advocate for the rights of women. Photo: UN Women/Monika Bihlmaier

The Executive Director held bilateral meetings with various dignitaries, including the President of Zambia, H.E. Edgar Lungu. He pledged his personal and governmental commitment to not only have laws that protect the rights of women and girls in place, but more importantly to change the attitudes and practices that perpetuate inequalities at all levels. He further accepted to be a champion for men’s leadership and signed on to UN Women’s HeForShe campaign, a commitment to advocate for the rights of women. The Executive Director invited all men to be champions of gender equality and women’s empowerment by signing up.

Watch this video on the African Year for Women