Save the date: 27 September: "A Commitment to Action"

WHAT: UN Women and the People’s Republic of China will co-host a landmark event in conjunction with the UN Summit on the post-2015 development framework and as part of the 20th Anniversary commemoration of the Beijing Declaration and Platform for Action. At the high-level “Global Leaders’ Meeting on Gender Equality and Women’s Empowerment: A Commitment to Action” event on 27 September, over 70 world leaders are expected to make concrete commitments and firm pledges to overcome gender equality gaps. It is a historic and a unique opportunity: for the first time at the UN, commitments to women and girls will be made at the level of Heads of States and Government.

Read the concept note and programme. 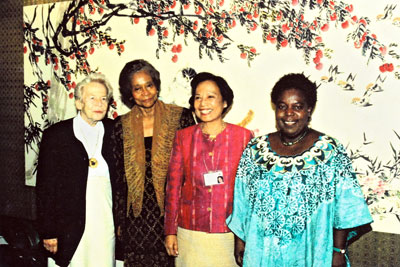 The Secretaries-General of the four World Conferences on Women (from left to right): Helvi Sipilä, Leticia Ramos-Shahani, Lucille Mair, and Gertrude Mongella. At the Global Leaders’ Meeting, the Presidents of Mexico, and Kenya—as the hosts of two previous World Conferences on Women—and the President of the 70th session of the General Assembly will contribute to co-chairing part of the event. Photo: UN Women

WHO: His Excellency Xi Jinping, President of the People’s Republic of China, and Ban Ki-moon, UN Nations Secretary-General, will give the opening remarks and co-chair parts of the event. The Presidents of Mexico, and Kenya—as the hosts of two previous World Conferences on Women—and the President of the 70th session of the General Assembly will contribute to co-chairing the remainder of the event. Along with top leaders, the meeting will be attended by representatives of multilateral organizations, civil society, private sector and youth groups.

BACKGROUND: In 1995, in China, 189 governments adopted the Beijing Declaration and Platform for Action, a comprehensive roadmap for gender equality and the empowerment of women. The Global Leaders’ meeting is the culmination of an 18-month-long journey, spearheaded by UN Women, which included the review of the Beijing Platform for Action at its 20th anniversary. National reviews by 167 countries were undertaken that identified achievements and gaps, providing national blueprints for action to achieve gender equality as a major contribution to achieving the SDGs. On 27 September, world leaders will be asked to make concrete commitments on how to close the identified gaps and change the trajectory of gender equality and the empowerment of women as key drivers of the new development framework and the Sustainable Development Goals.