(Revised / updated on 12 October 2015)
A new report released today by the United Nations Broadband Commission reveals that almost three quarters of women online have been exposed to some form of cyber violence, and urges governments and industry to work harder and more effectively together to better protect the growing number of women and girls who are victims of online threats and harassment. 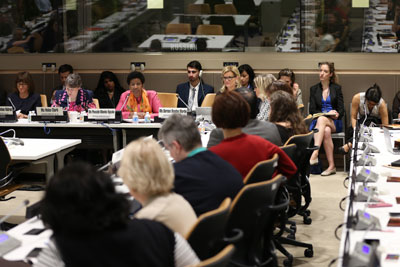 The paper notes that despite the rapidly growing number of women experiencing online violence, only 26 percent of law enforcement agencies in the 86 countries surveyed are taking appropriate action.

Entitled ‘Combatting Online Violence Against Women & Girls: A Worldwide Wake-Up Call’, the paper was released earlier today at an event at United Nations Headquarters in New York by the Commission’s Working Group on Gender, which is co-Chaired by UNDP Administrator, Helen Clark, and UN Under-Secretary-General and UN Women Executive Director Phumzile Mlambo-Ngcuka. Working Group members, which also include representatives from the tech sector and civil society, hope the paper will mobilize the public and private sectors to establish concrete strategies aimed at stemming the rising tide of online violence against women.

Without concerted global action to curb the various escalating forms of online violence, an unprecedented surge of ‘cyber violence against women and girls (cyber VAWG)’ could run rampant and significantly impede the uptake of broadband by women everywhere. The paper notes that cyber VAWG already exists in many forms, including online harassment, public shaming, the desire to inflict physical harm, sexual assaults, murders and induced suicides. 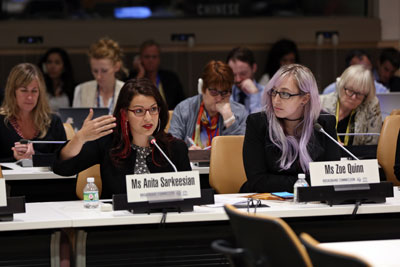 The rapid spread of the Internet means that effective legal and social controls of online anti-social and criminal behaviours continue to be an immense challenge. And in the age of the social Internet and ‘anywhere, anytime’ mobile access, cyber violence can strike at any time, and can relentlessly follow its targets everywhere they go.

“In this paper we’re arguing that complacency and failure to address and solve cyber violence could significantly impede the uptake of broadband services by girls and women worldwide,” said ITU Secretary-General Houlin Zhao, who serves as co-Vice Chair of the Broadband Commission, alongside UNESCO Director-General Irina Bokova. “The Net is an amazing resource for personal empowerment, and we need to ensure that as many girls and women as possible benefit from the amazing possibilities it offers.”

Key findings of the paper include: 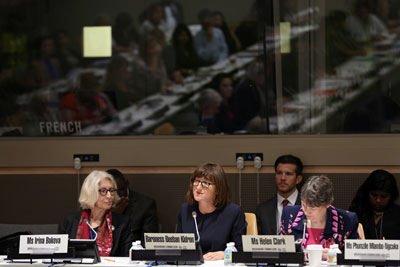 UK film-maker and director of the film ‘In Real Life’ about teen experiences online, Baroness Beeban Kidron, speaks at the launch of the new UN report on cyber violence against Women and Girls on 24 September. Photo: UN Women/Ryan Brown

“Violence against women and girls is never acceptable anywhere, no matter whether it is committed on the streets, in the home, or on the information highway,” said UNDP Administrator Helen Clark. “To achieve sustainable development for all, we must build a world where women and girls can live their lives free of violence and fulfil their potential as valued and equal members of society.”

“Online violence has subverted the original positive promise of the internet’s freedoms and in too many circumstances has made it a chilling space that permits anonymous cruelty and facilitates harmful acts towards women and girls,” said UN Women’s Phumzile Mlambo-Ngcuka. We want to reclaim and expand the opportunities it offers. That means recognizing the scale and depth of the damage being done – and taking strong, concerted steps to call it – and stop it.  Abuse online is still abuse, with potency and very real consequences.”

The paper presents a set of Key Recommendations, proposing a global framework based around three ‘S’s – Sensitization, Safeguards and Sanctions. 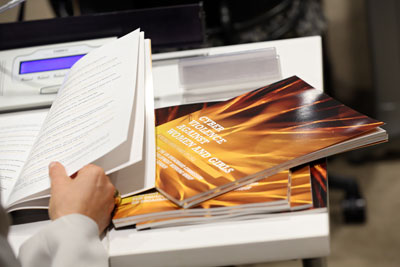 A new report, launched by the United Nations Broadband Commission on 24 September, reveals that nearly three quarters of women online have been exposed to some form of cyber violence. Photo: UN Women/Ryan Brown

The paper argues that rigorous oversight and enforcement of rules banning cyber VAWG on the Internet will be an essential foundation stone if the Internet is to become a safe, respectful and empowering space for women and girls, and, by extension, for boys and men.

You can watch an on-demand webcast of the launch event at: http://webtv.un.org

Download a free copy of the report along with Report Highlights in all six UN languages:

Broadcast-quality video soundbites in English, French and Spanish are available at:

Broadcast-quality audio soundbites in all three languages can be downloaded at: https://soundcloud.com/ituproduction.

Photos of the report cover and the launch event are available here.

For more on the Broadband Commission, visit: www.broadbandcommission.org

Related News
24/09/2015
“With just the press of a button you can depress a person” – Executive Director on cyber violence
23/07/2013
Tweetup on #OrangeDay: Say NO to violence against women & girls in cyberspace
20/05/2021
I am Generation Equality: Martha Clara Nakato, advocate for bodily autonomy and sexual and reproductive health rights in Uganda
06/07/2020
Op-ed: The role of digitalization in the Decade of Action
22/03/2018
EU-UN Spotlight Initiative urges inclusive global action on violence against women and girls
END_OF_DOCUMENT_TOKEN_TO_BE_REPLACED