In a country where half of girls are married before age 18, UN Women played a key role in lobbying for a new law that raises the legal age to wed, while raising awareness and working with traditional leaders to annul marriages.

In June 2015, Senior Chief Inkosi Kachindamoto annulled 330 customary marriages – of which 175 were girl wives and 155 were boy fathers – in Dedza district, in the Central Region of Malawi. The objective was to encourage these youth to return to school, and continue a healthy childhood. 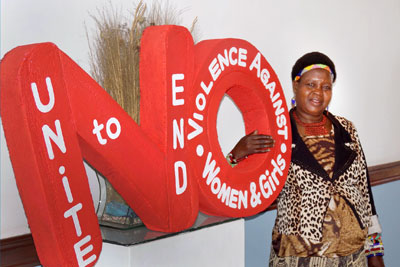 Bernadetta Matison, 17, was among them. Married at 15, she became pregnant the same year. “I dropped out of school because I got pregnant,” she said. “I’ve seen the evils of getting married at a young age. When I think about it now, I realize that getting married at such a young age isn’t a good thing. At the end of the day, we still lack the things that brought us into the marriage in the first place, like soap and lotion and other basic items. Some even get beaten, which isn’t right.”

Child marriage and pregnancy remain the main causes for their high dropout rates. The many young girls who have left school have few opportunities to earn a living, which leaves them exposed to various forms of gender-based violence. Though there are an equal number of boys and girls in lower grades of Primary School in Malawi, only 45 per cent of girls stay in school past standard eight (8th grade).

While civil marriages can only be terminated under civil law, customary marriages are regulated by custodians of culture. Therefore, UN Women Malawi has engaged with traditional leaders, including Chief Kachindamoto, to fight the cultural and religious practices that have allowed child marriages.

“I don’t want youthful marriages,” said Chief Kachindamoto. “They must go to school… no child should be found loitering at home or doing household chores during school time.”  The Chief clearly states that opportunities that the youth have today, were not readily available for her. Marrying early in her time was a norm.

In Malawi in 2012, one in every two girls was married before the age of 18 and according to the UN Population Fund, it has one of the highest rates of child marriage in the world, ranked 8th out of 20 countries considered to have the highest rates.

Through consistent advocacy efforts, UN Women and its partners have played an integral part in raising awareness on this issue and lobbying for legislative change. Efforts by UN Women included lobbying and training parliamentarians, engaging with traditional leaders and mobilizing civil society to advocate for the enactment of a law. More than 12 years in the making, Malawi’s Marriage, Divorce and Family Relations Act, was passed by Parliament in February and enacted in April 2015. It raises the minimum age of marriage without parental consent to 18, but has no impact on young women and men already married.

Chief Kachindamoto’s decision was initially met with resistance from other community and opinion leaders, young couples and their parents—especially in marriages where a dowry had been involved—but she continued door-to-door campaigning  in the community with mothers’ groups, members of the Village Development Committee, faith-based leaders and NGOs-- lobbying, sensitizing and even annulling marriages.

Chief Kachindamoto also suspended village heads that had consented to child marriages, as the community’s bylaws forbade it, even before the new Marriage Act. Now that Chiefs have been recognized for their role in the new Act, it makes it easier for the suspensions to be regulated under this law.

“I talk to the parents. I tell them: if you educate your girls you will have everything in the future,” said Chief Kachindamoto.

The new Act, and annulments have opened a new realm of possibilities for young women like 21-year-old Stella Kalilombe, who was married at 16 and endured an abusive relationship for many years. “I suffered, but I survived,” she says. “Which is why I decided to go back to school, to shape that future, a future of hope, peace and happiness for my family and I.”

UN Women will continue to support traditional leaders, as well as the Ministry of Gender, Children and Social Welfare to ensure that the recent changes in marital law are fully understood and implemented, and that the Ministry is able to move forward with future work on gender equality.

Related News
27/11/2015
Girls speak out at the First African Girls' Summit on Ending Child Marriage
05/10/2016
From where I stand: Elizabeth Chatuwa
09/10/2015
Statement by UN Women Executive Director Phumzile Mlambo-Ngcuka for International Day of the Girl Child, 11 October 2015
05/10/2015
“Education is power” – Girl Guide teacher/trainer
12/02/2020
Calling for action to meet the unfulfilled promise of education for girls
END_OF_DOCUMENT_TOKEN_TO_BE_REPLACED