Senegalese rural women strive for the sustainable use of sea resources

UN Women and WFP introduce modern processing technologies to support women in Kafountine committed to repurposing and adding value to fresh fish that would otherwise go to waste. 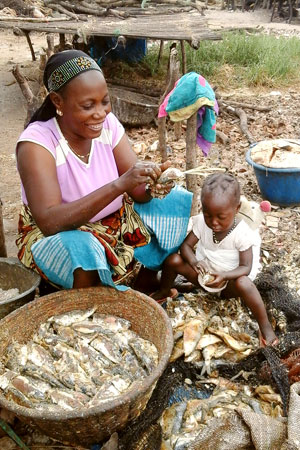 In Casamance, a region located in the south of Senegal, women play a fundamental role in artisanal fish processing, a traditional way of storing and adding value to fresh fish when the catch exceeds what can be consumed.

There are many steps involved. It entails re-purposing the excess fish into products such as dry or smoked fish, which can significantly reduce post-harvest losses. According to local estimates, the activity absorbs on average 30-40 per cent of fish landings, and in some areas, can save up to 75 per cent of fish destined to waste [1].

Fish processing has been recognized as a high-potential sector in Senegal, where 90 per cent is controlled by women [2]. They have relied on traditional ovens, which are inefficient and have negative health and environmental consequences due to the burning of firewood to cook the fish. 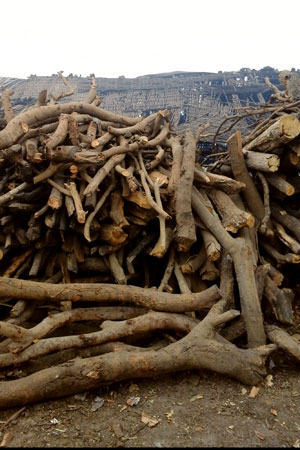 “The use of traditional ovens has significantly impacted our living environment,” says Bineta Mané, President of the Women’s Union of Fish Processors. “This area used to be very green. Due to the substantial quantity of wood needed for traditional ovens, you can witness the deforestation and degradation of our surroundings.”

Ms. Mame Binta Demba, Executive Secretary of the Women’s Union of Fish Processors, adds that the smoke from traditional ovens has contributed to heart disease among several women and children involved. The use of traditional equipment also slowed production.

“Since we can’t truly control the temperatures of traditional ovens, we often burn our products and have to get rid of them, as they are not marketable,” says Ms. Demba, Executive Secretary of the Women’s Union of Fish Processors.

As a result, fishers are expected to deliver more fish, which is progressively leading to overfishing. Signs of fish shortages have already been reported by Kafountine fishers. 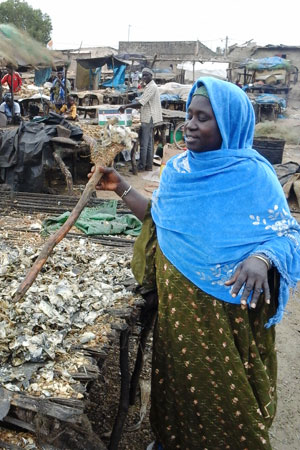 The Women’s Union of Fish Processors says it had not received aid from any development organizations for more than two decades. That changed recently with support from UN Women and the World Food Programme (WFP) in 2014. 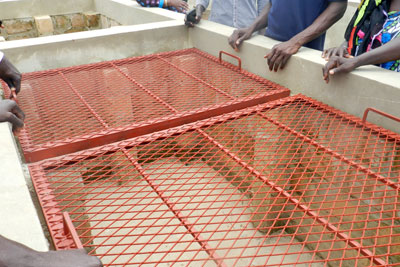 Ms. Demba adds: “When UN Women and WFP decided to implement this project here, we knew that our lives would be transformed. We can already see how we will be able to increase our production in a more efficient way and market better-quality products. Most importantly, we are thrilled to see the improvement of our working conditions and the impact on our health.”

Currently the construction of a modern fish-processing site in Kafountine, a rural area in Casamance, is underway. The project aims to strengthen the resilience of women in fish processing, increase their socioeconomic empowerment and foster the eventual development of environmentally friendly products. 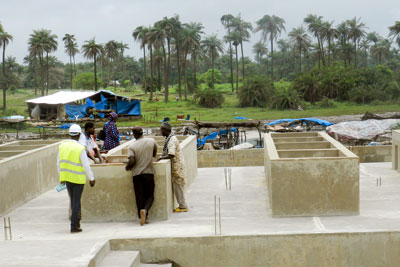 Modern equipment will also seek to significantly decrease the negative health and environmental effects, and contribute to the sustainable use of sea resources by limiting overfishing and waste.

Introducing new processing technologies will enable these women to benefit from a reliable income-generating activity through the savvy use of sea resources. They will also be better-equipped to truly fulfil their roles of reusing sea products previously destined to waste, thereby contributing to the conservation and sustainable use of sea resources in Casamance. 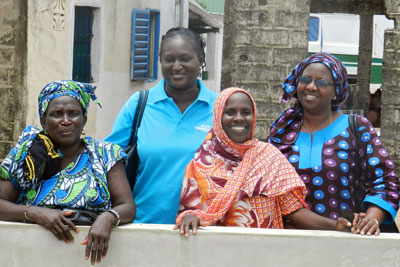 “Through this project, UN Women hopes that small-scale food processing will be more recognized as a powerful tool in the fight against the impoverishment of populations, including the most disadvantaged, as it contributes to the democratization of access to food and increases the economic empowerment of women,” said  Marie Pierre Raky Chaupin, UN Women Senegal Country Coordinator.

With better-quality products, WFP plans to buy the fish products these women produce to supply school canteens, which will in turn significantly increase the women’s income.

The inauguration of the new transformation site with modern ovens will take place in December 2015.

Related News
23/02/2017
From where I stand: “I became the first fisherwoman in my community”
12/12/2017
Press release: UN Initiative to boost resilience of women and youth in the Sahel through climate-smart agriculture launched at One Planet Summit
20/04/2021
From where I stand: “A better understanding of climate change has transformed the way we work”
30/01/2020
From where I stand: “Expanding economic opportunities of women is key to ensure safety and prosperity”
10/09/2019
In the Bolivian Amazon, women are protecting the forest and empowering themselves
END_OF_DOCUMENT_TOKEN_TO_BE_REPLACED