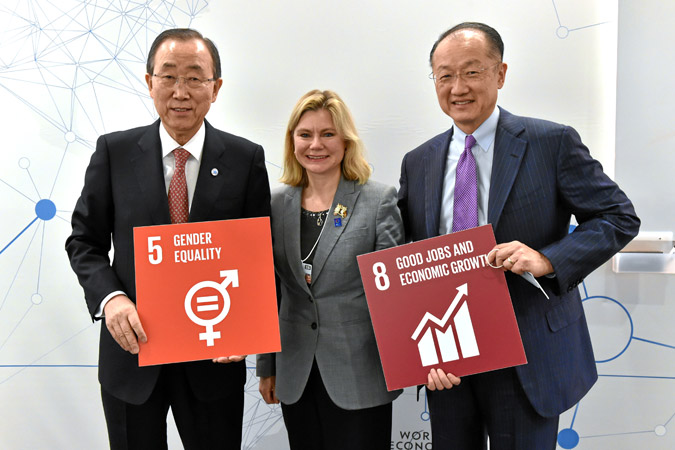 The Panel will provide recommendations for the implementation of the 2030 Agenda for Sustainable Development to improve economic outcomes for women and promote women’s leadership in driving sustainable and inclusive, environmentally sensitive economic growth. It will provide recommendations for key actions that can be taken by governments, the private sector, the UN system and other stakeholders, as well as policy directives needed to achieve the new targets and indicators in the Sustainable Development Goals which call for the economic empowerment of women. The panel is backed by the United Kingdom, the World Bank Group and UN Women.

The Co-Chairs of the Panel are Luis Guillermo Solis, President of Costa Rica, and Simona Scarpaleggia, CEO of IKEA Switzerland. They will be joined by the leaders of the International Monetary Fund, World Bank Group, UN Women and a diverse range of eminent gender and equality actors, economics experts, academics, trade union leaders, business and government representatives from all regions. The Panel will be supported by an independent Secretariat, hosted by UN Women with backing from the UK Government.

UK International Development Secretary Justine Greening, a founding member of the Panel, welcomed its launch. She said: “I am hugely proud to be a part of this Panel. Investing in girls and women isn’t just about basic human rights, it’s about fully unlocking the potential of half the world’s population. The UK is already at the forefront of this effort. At the Department for International Development I have put improving the lives of girls and women at the very heart of our work and Britain is successfully leading the fight against FGM and child marriage, as well as getting girls into school and women into jobs. Strong economies need the contribution of everyone—including women—and this panel will spearhead a movement to put women’s economic empowerment on the global agenda like never before.”

Jim Yong Kim, World Bank Group President, also a founding member of the Panel, stated: “The World Bank Group is strongly committed to gender equality, which is integral to ending poverty and boosting shared prosperity. Our new Gender Equality Strategy puts a much sharper focus on economic empowerment.” He added: “No society, community or economy can achieve its full potential—or meet the escalating challenges of the 21st century—until all its people can achieve theirs. We are pleased to partner with the UK’s Department for International Development and the United Nations in convening this important panel, whose work will accelerate progress towards the goals we share.”

The High-Level Panel will help tackle gender gaps in economic opportunities and outcomes which persist around the world, building on the growing evidence and recognition by governments and the private sector that women’s economic empowerment has a multiplier effect and boosts whole economies. Research shows that women invest their income back into their families and communities, including in health and education. McKinsey Global Institute estimates that if women in every country were to play an identical role to men in markets, as much as US$28 trillion would be added to the global economy by 2025.

Yet women continue to earn less, have fewer assets, bear the burden of unpaid work and care and be largely concentrated in vulnerable and low-paying activities. Women spend more than twice as much time on unpaid care and domestic work as men and women on average are paid 24 per cent less than men globally for the same work. Moreover, 75 per cent of women’s employment in developing regions is informal and unprotected. These gaps constrain women’s rights and hinder economic growth and productivity. Significantly scaled up actions and political will are required to ensure that governments, development organizations and others invest in the economic empowerment of women for the benefit of whole societies.

The High-Level Panel will have its inaugural meeting during the 60th session of the Commission on the Status of Women at the United Nations in March 2016. A series of regional consultative meetings will also take place, and the Panel’s first report with action-oriented recommendations will be issued in September 2016.