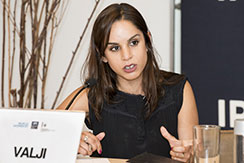 Nahla Valji, Deputy Chief of UN Women’s Peace and Security Section, has led the organization’s policy and programmatic work, including with the UN Security Council, on peacekeeping, peace negotiations, transitional justice and rule of law, and countering violent extremism. Recently, she headed the Secretariat for the “Global Study on the Implementation of United Nations Security Council resolution 1325”, a comprehensive study requested by the UN Security Council for the 15-year review of women, peace and security. She has close to 20 years of experience in the United Nations and civil society, founded and managed the International Journal of Transitional Justice and is currently a co-editor of the Oxford Handbook on Gender and Conflict. Prior to joining the United Nations, Ms. Valji worked in South Africa, where she led the regional transitional justice work of the Centre for the Study of Violence and Reconciliation and managed the African Transitional Justice Research Network. She has a Master’s degree from York University, Canada.

This week, as the United Nations Security Council holds the annual Open Debate on Women, Peace and Security to discuss protection of women and girls in conflict and women’s leadership in preventing, resolving, and recovering from conflicts, the war in Syria enters its sixth year, contributing to a global refugee crisis. Iraqi forces enter Mosul amidst a dire humanitarian situation, and peace remains uncertain in countries such as South Sudan and Colombia. The global political landscape is volatile, challenging and increasingly complex. The number of people in need of international assistance has tripled over the past decade and 80 per cent of them are affected by armed conflict [1]. In 2015 alone, the global cost of violence and conflict was estimated at more than USD 13.6 trillion [2]. Violent extremism and terrorism is on the rise, and the fragile gains on women’s rights are under attack.

It is within this context, that the United Nations undertook three separate reviews on peace and security last year—on peace operations, the UN’s peacebuilding architecture and on fifteen years of women, peace and security. I had the privilege of heading the review on women, peace and security, which concluded with the “Global Study on the Implementation of United Nations Security Council resolution 1325 (2000)”, authored by Radhika Coomaraswamy. The study drew upon global consultations and new research and emerged with one key finding—women’s meaningful participation is the most important and overlooked ingredient for sustainable peace.

The study showed, backed by data, how women’s participation would increase the reach of humanitarian assistance, accelerate economic recovery and reconstruction, improve the effectiveness and credibility of our peace operations, and help prevent and counter violent extremism. For example, we now know that the probability of a peace agreement lasting at least 15 years is 35 per cent higher when women are included [3]. However, our actions and policies are yet to respond to this evidence.

What can be done to change this? The study listed more than one hundred recommendations and ideas, including quotas, earmarks, targets and other temporary special measures that are still under-utilized or used as aspirational benchmarks. If countries were to act upon these recommendations, we could realistically remedy the gender imbalances currently undermining our peace and security response.

One of the recommendations of the global study, calling for the creation of a new mechanism in the UN Security Council—the Informal Expert Group on Women, Peace and Security (IEG)—has been fulfilled. The IEG began its work in February, shortly after the launch of the study, co-chaired by the United Kingdom and Spain and with UN Women as its Secretariat. In just eight months, through this forum, the Security Council has heard directly from the UN’s senior leadership on the ground and received quality gender and conflict analysis that would be otherwise absent from its regular reports and deliberations.

Apart from examples of extreme violence against women—an issue that has finally gained more visibility in the last two decades—the Council is now hearing examples of extreme political marginalization and exclusion of women in key peace and security processes and the gender dynamics that fuel or mitigate conflict. For example, Council experts heard detailed new research from Mali showing that the strongest factor pulling former combatants away from the battlefield and back into their communities were female family members; and that social media was being used to target urban youth in the north with anti-women’s rights language in order to lay the foundations for radicalization. It heard that in Iraq, there was not a single woman in the four command cells administering the return of population to liberated areas; and in Central African Republic, since the end of the transition, women’s representation in national institutions has dropped again, down to single digits in the parliament.

This information is already being used to strengthen UN programming on the ground and by civil society representatives advocating for peace. The IEG, like many other policy processes, will not lead to overnight changes in the lives of women in conflict-affected countries, but we fully expect it to improve the response of the UN and other international actors. At the very least, the Security Council cannot hear only once a year that women’s leadership and participation is a missing ingredient in crisis response and stabilization efforts. It must hear it all year-round, directly from the people it deploys on the ground, and act upon it.

[1] United Nations (2016). Strengthening of the coordination of emergency humanitarian assistance of the United Nations – Report of the Secretary-General (A/71/82–E/2016/60).

Related News
11/04/2022
Speech: Women’s involvement is both a right and an opportunity for better outcomes
08/03/2022
Speech: We must give peace a chance
20/10/2021
Take five: Investing in gender equality and women peacebuilders makes for lasting peace
20/08/2021
Strengthening women’s meaningful participation in peace processes
21/10/2020
In the words of Miriam Coronel-Ferrer: “I became the first female negotiator to sign a final peace accord with a rebel group”
END_OF_DOCUMENT_TOKEN_TO_BE_REPLACED