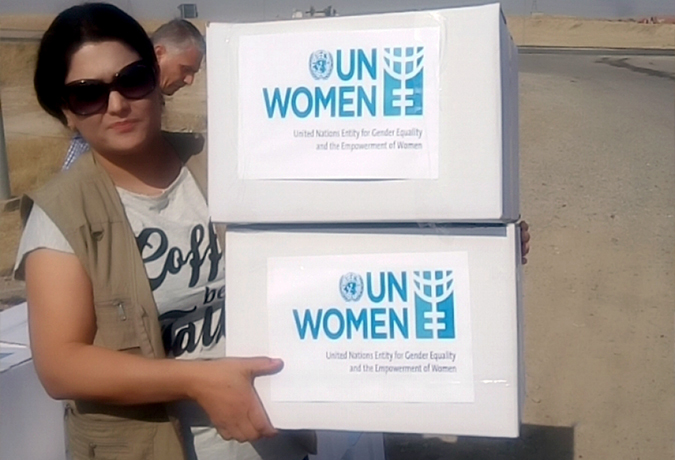 UN Women has joined partners in providing emergency assistance in camps and host communities impacted by the Mosul operations. Since the Mosul operations began on 17 October 2016, the humanitarian crisis has deepened, with more than 15,000 individuals displaced and an anticipated 1.2 million expected as the operations continue.

Given that an estimated half of the current and anticipated IDPs from the Mosul operations are women, girls, and female-headed households in need of urgent necessity items, the UN Women team distributed necessity kits on Saturday, 29 October 2016, in the Debaga IDP camp to respond to the dignity needs for women and girls. 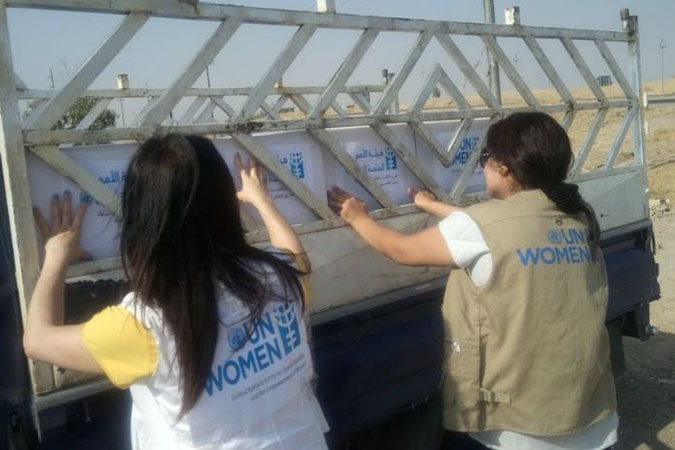 UN Women Iraq visit an IDP camp to distribute kits to women and girls who have been displaced from Mosul. UN Women/Bernice Rumala

Dr. Paulina Chiwangu, UN Women Iraq Deputy Country Representative, states “Women and girls fleeing from conflict often face many obstacles as they leave their ancestral homes, strive to keep their families together, survive human rights abuses, and serve as pillars of unity within their communities. However, the necessity needs of women and girls to maintain dignity are often forgotten. Through this aid and ongoing services, we are reminding them that they are valued”.

Read the full press release on the UN Iraq website.

Related News
18/10/2022
In the words of Anastasia Perepylytsia: "Women are half of the population, whose opinions and needs must be taken into account."
21/01/2019
In the words of Nur Omar: “I’ve healed the wounds of war and feel more confident about my future”
22/09/2022
In Focus: War in Ukraine is a crisis for women and girls
11/04/2022
Speech: Women’s involvement is both a right and an opportunity for better outcomes
08/04/2022
Women spearhead climate change response in the South Pacific
END_OF_DOCUMENT_TOKEN_TO_BE_REPLACED