On Monday 19 December, UN Women and the UN Inter-Agency Network on Youth Development’s Working Group on Youth and Gender Equality celebrated the launch of CEDAW for Youth, the youth-friendly version of the Convention on the Elimination of All Forms of Discrimination Against Women (CEDAW), as well as recognized the 37th anniversary of CEDAW’s adoption with a special event at the UN Women Headquarters in New York. 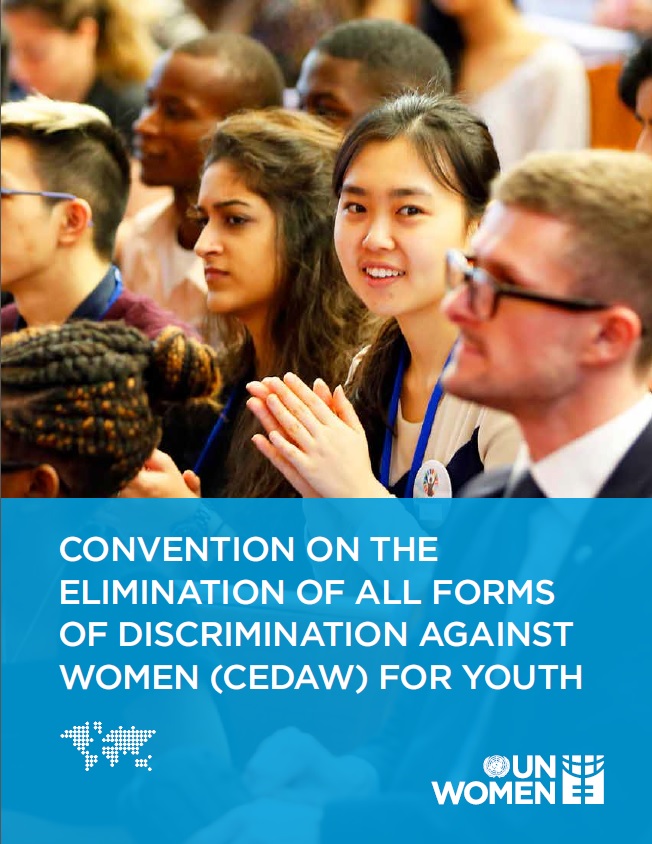 Often described as the international bill of rights for women, CEDAW is an international legal instrument that requires countries to eliminate discrimination against women and girls in all areas and promotes women’s and girls’ equal rights.

“As long as there is discrimination against women and girls, there is inequality. Its elimination is a cornerstone of UN Women’s mandate and of all our work, and we see young people as crucial drivers of change in achieving gender equality. We work closely with the CEDAW Committee, member states, and with our UN and civil society partners to see CEDAW brought to life through action at the country level,” says UN Women Executive Director Phumzile Mlambo-Ngcuka.

Young women, young men and youth-led organizations, networks and movements have an important role to play in holding their governments accountable for respecting and protecting human rights for all women and girls. It is critical that all youth understand their human rights, and are empowered to claim their human rights. CEDAW for Youth is an essential resource for all the youth around the world who are striving to achieve and live in a gender equal world.

CEDAW for Youth was written by a young women and a young man.

“Gender equality is not a favour, it’s a fundamental human right,” says co-author Pooja Khanna. “Many young people in my generation, especially young women, don’t know about CEDAW and the human rights we are all entitled to, which is why CEDAW for Youth is so important.”

As of 2016, 189 UN member states have ratified CEDAW. Around the world, CEDAW has been a key tool for advancing women’s rights and gender equality, providing the basis for judicial decisions, and constitutional, legal and policy reforms at the country level. Many countries have been guided by CEDAW to adopt equal opportunity acts and quotas to increase the number of women in elected office, and enact new laws and action plans to prevent and address violence against women.

“CEDAW is the most comprehensive international instrument to protect and promote the human rights of women and girls. Understanding CEDAW will provide young women and young men with a powerful instrument to advance towards what is often called ‘the last frontier of the civil rights movement’—achieving gender equality and making the empowerment of all women and girls the reality of our time,” says UN Women Deputy Executive Director Lakshmi Puri.

The new 2030 Agenda for Sustainable Development recognizes gender equality as a prerequisite for achieving sustainable development and all the other SDGs. With the SDGs and CEDAW, world leaders have the human rights foundation, the commitments and the mechanisms for implementation and accountability, and the timeline for achieving gender equality, empowering all women and girls, and ending all forms of discrimination.

Related News
11/02/2013
Abolishing Sang Chatti: Pakistan works to prevent compensation marriage and other forms of violence against women
09/12/2020
In the words of Nahla Haidar: “States have a due diligence responsibility on the protection of women human rights defenders”
14/11/2017
Rural women explore new solutions to counter customs and poverty driving FGM crisis
14/11/2017
In the words of Jana Mustafa: “Disability should not stop anyone from starting over”
01/07/2016
UN Women statement on the Committee on the Rights of Persons with Disabilities
END_OF_DOCUMENT_TOKEN_TO_BE_REPLACED