On mission in the Netherlands, UN Women Executive Director calls for action to protect women and girls fleeing from conflict

On the final day of her first official visit to the Netherlands from 23–26 January 2016, UN Women Executive Director Phumzile Mlambo-Ngcuka took part in a talk-show-style discussion with Dutch Minister of Foreign Trade and Development Cooperation Lilianne Ploumen during which they called for an end to violence against women and girls who are fleeing from war and other disasters. 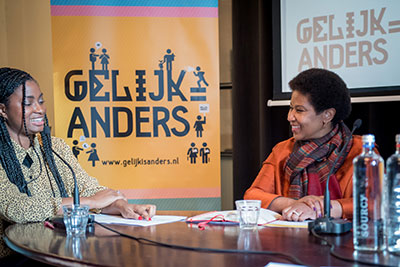 UN Women Executive Director Phumzile Mlambo-Ngcuka took part in a talk-show-style discussion during her visit to the Netherlands.Photo: Lisa Stumpel

“This is an appeal to all leaders, especially those heading UN agencies and other organizations that provide reception for refugees. But we also urge every political, civil-society and religious leader to take action and pursue dialogue with those in their circles. They must use their position to do all they can to combat these forms of abuse,” Ms. Ploumen and Ms. Mlambo-Ngcuka stated.

Ms. Mlambo-Ngcuka continued: “We call for an end to this violence and the start of dialogue to confront and explore what these women are having to cope with. This is a catastrophic waste of human potential, with consequences that reverberate through generations. Everyone who has a connection to these events must assume their responsibility for contributing to change.” 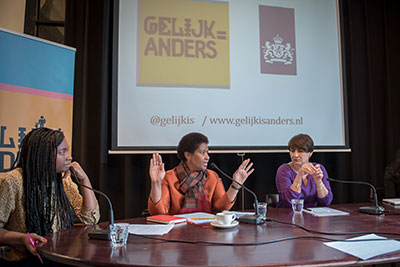 UN Women Executive Director Phumzile Mlambo-Ngcuka and Dutch Minister of Foreign Trade and Development Cooperation Lilianne Ploumen called for an end to violence against women and girls fleeing from war and other disasters. Photo: Lisa Stumpel

Girls and women who are displaced are now among the most vulnerable in the world and often experience sexual violence. Ms. Ploumen and Ms. Mlambo-Ngcuka pointed out that women refugees often fall prey to assault and rape, not only during transit, but also once they have reached a safe destination. They added that UN agencies and other aid organizations that deal with refugees should give extra attention to the safety of women.

“It ranges from installing more lighting in camps so that women can safely go to the toilet, to education and awareness programmes educating men,” said Ms. Ploumen, who will appeal to the relevant institutions accordingly.

On Monday, Ms. Ploumen announced that the Netherlands will spend EUR 127 million on humanitarian aid this year. One of the key priorities of this aid will include ensuring the safety of women and girls, for example, by providing assistance to Yazidi women and girls who have suffered sexual violence. 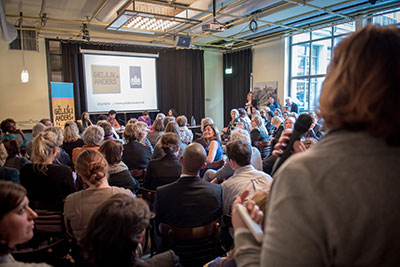 Following Ms. Mlambo-Ngcuka’s mission, the Government of the Netherlands confirmed that it will increase funding to the core budget of UN Women from EUR 4 million to EUR 7 million for 2016.

The Netherlands has been a key partner of UN Women in its work to combat violence against women and promote women's leadership, for example, supporting efforts to ensure that Syrian women can participate in peace talks. Ms. Mlambo-Ngcuka and many other world leaders, including Ms. Ploumen and Dutch Prime Minister Mark Rutte, will attend an international pledging conference in London on 4 February, focusing on assistance to the Syrian region.

During Ms. Mlambo-Ngcuka’s four-day visit to The Netherlands, she also met with high-level officials, women’s groups, private sector partners and ICC Prosecutor Fatou Bensouda. She also visited a women’s shelter and support centre and took part in a discussion on women’s economic empowerment.