Creating a 50-50 world starts within the UN

On 8 March, the official commemoration of International Women's Day at the United Nations Headquarters in New York called for a “Planet 50-50 by 2030”. Divided into two panels, the first half focused on partnerships to achieve the Sustainable Development Goals, while the latter panel was a lively discussion on how to increase the number of women staff within the UN system. 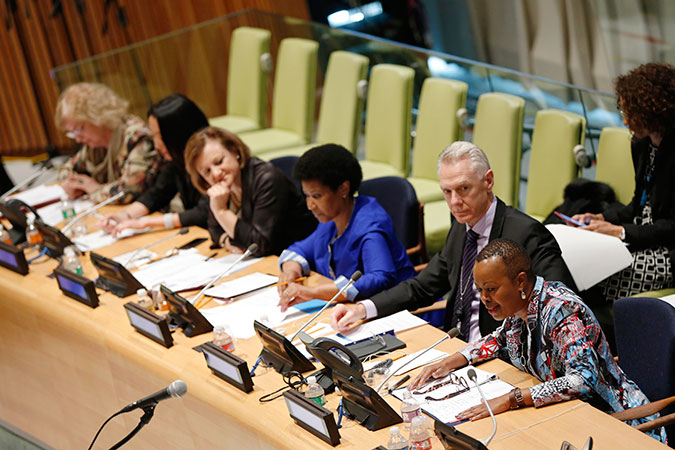 Moderated by Ms. Mlambo-Ngcuka, the five panelists in “the Push for Parity” discussion honed in on the challenges the UN is facing in achieving full gender equality within its own workforce. Representatives of several UN organizations and a professor of political science tackled ways to overcome these barriers.

Head of UN Safety and Security Peter Thomas Drennan underscored that for years there has been a disproportionate number of men serving in the justice system compared to women.

“There were no female judges, female prosecutors, female defense counsels. It was a male-dominated system, and it didn't respect, value and even understand what gender equality was. We were completely out of sync with society and the community, and we needed to do something about it,” explained Mr. Drennan.

In order to increase women’s presence in the organization, the UN put a number of accountability measures in place to ensure that gender mainstreaming becomes a priority.

These measures included mandatory training courses on gender and evaluating all staff regardless of sex. A 10-point System-Wide UN Action Plan was also put in place, which helped accelerate efforts towards achieving full gender equality and creating solidarity among UN bodies.

Although UN agencies have taken the initiative to increase women within the system, Carole Wainaina, Assistant Secretary-General for Human Resources Management said the UN is still lagging far behind in areas of representation.

To combat the problem, panelists recommended gathering more evidence to determine why more women are not applying. They urged an examination of the recruitment process and increasing the number of women on panels.

Although UN Secretary-General Ban Ki-moon has appointed a number of women as heads of agencies, Ms. Mlambo-Ngcuka told the UN News Service that the UN must: “Step it up. We still have UN events with an all-men panel discussing an issue that is central to everybody, women and girls. The assumption that men will know what needs to be done is cheeky, to say the least,” she said, adding that it was time for a woman to be a Secretary-General.