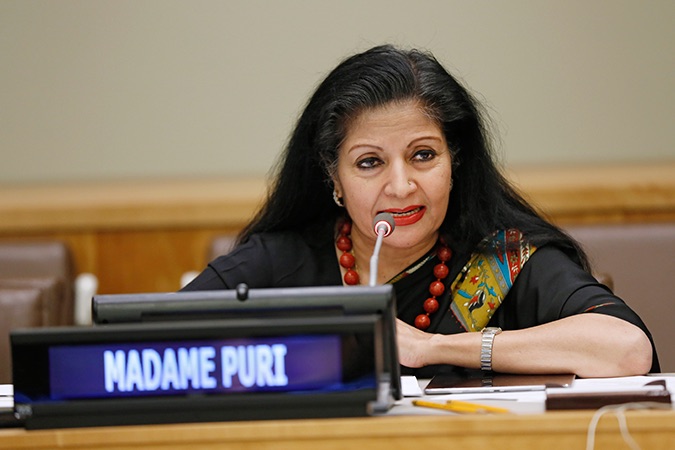 Let me begin by inviting you to stand up and give a high-five to the people around you—a high-five for gender equality and SDG 5!

I am so grateful to all the young women and young men leaders in this room. You have created ‘HerStory’ by being a part of the first-ever global outreach by young people to support the global young women’s movement.

This forum is also the occasion on which UN Women has launched the first-ever Youth and Gender Equality Strategy—recognizing the importance of young women and young men and their critical role in leading us towards Planet 50-50 by 2030.

I would like to thank the YWCA and the UN Inter-Agency Network on Youth Development’s Working Group on Youth and Gender Equality for co-organizing this wonderful event and for all the tremendous efforts that have been made in the past to bring the Commission on the Status of Women (CSW) closer to the youth of the world.

Special thanks to His Excellency Ambassador Antonio de Aguiar Patriota, Chair of the CSW; Ms. Deborah Austin, President of the World YWCA; Ms. Nicola Shepherd, UN Inter-agency co-chair (UNDESA); and Ms. Maria Jose Landeira Oestergaard, President of Zonta International, for taking your time to come here today and be part of a rising chorus of activism around the world to stop violence and discrimination against women and girls everywhere.

This CSW Youth Forum has taken place at a historic juncture. It comes after the adoption of the 2030 Agenda for Sustainable Development by all Member States. The voice and actions of youth will be critical to achieving the objectives and goals of the 2030 Agenda.

Your presence here strengthens the United Nation’s message that investing in girls and young women is a powerful path to help young women, men and entire societies to escape from violence and marginalization.

This forum marks an important milestone in the rejuvenation of the United Nations. This is the first-ever youth forum tagged and linked to the CSW, and will provide an essential perspective and inputs to the CSW outcomes. We hope it will become an annual institution in the build up to the CSW.

This first-ever CSW Youth Forum, and your active participation in it, as well as the Youth Agreed Conclusions that you are presenting before CSW, strengthen the UN message that promoting gender equality is central to achieving the internationally agreed Sustainable Development Goals, and the call for ensuring that women and girls are at the centre of the post-2015 development agenda.

I want to point out that the 2030 Agenda is a pledge to today’s youth and tomorrow’s future.

In a world where one in five people are under the age of 24, and approximately half of all young people are adolescent girls and young women, the 2030 Agenda and the Beijing Platform for Action have very real and hard implications for young people. Gender inequality, experienced every day, on the streets, at homes, in work places, schools and playgrounds, is holding them back from reaching their full potential. For example:

Gender inequality starts very early. Efforts must be made to overcome gender stereotypes, social norms, behaviour and attitudes that perpetuate inequality and discrimination against women and girls.

A bottom-up and inclusive approach, starting at the grass-roots level, is needed to consolidate the building blocks of an equal world. You, the youth leaders of today, have to start an inclusive conversation in your communities, schools and work places, and among your friends on gender equality. Your support is most needed in engaging men and boys as gender equality advocates. Youth should also engage traditional leaders and faith-based organizations to promote gender equality.

The implementation of the 2030 Agenda requires you to champion the cause. In defining the ‘how’ to achieve commitments, I want to refer to the 10 key levers of change—what I call the Ten ‘I’s.

We have to embrace collaboration with young women-led civil society organizations (CSOs) as a principle for the SDGs’ implementation. I encourage greater participation of the CSO movement as well as greater involvement of young men in the solidarity movement (HeForShe) to achieve gender equality and women’s empowerment.

UN Women recognizes the role that the generation that was born in, or after, 1995 has to play. To facilitate youth engagement, strengthen initiatives for empowerment of young women, and develop young men as partners in gender equality and women’s rights, UN Women has developed a youth and gender equality strategy.

I also want to emphasize The Youth and Gender Equality Strategy’s “LEAPs” framework, which calls for strengthening young women’s Leadership, promoting Economic empowerment and skills development of young women, and Action to end violence against young women and girls. Additionally, it makes a case for promoting the Participation of young women and their organizations, Partnerships with young men in gender equality as well as intergenerational Partnerships throughout the lifecycle.

UN Women is also committed to creating a space for dialogue that is necessary to develop transformative strategies and perspectives on implementing Beijing and achieving gender equality by 2030. We would like to open a dialogue between youth advocates and Beijing “veterans,” also through the engagement of key constituencies, men and boys, faith-based organizations, indigenous groups, disability groups, LGBTIQ groups, social justice actors, the private sector and the media.

The importance of alliance-building in feminist advocacy and in political engagement, in order to both influence the international agenda and realize women’s and girls’ rights at the national level, has become urgent. New alliances with other social justice movements have become key to the realization of women’s rights.

The “youth agreed conclusions” have been constituted, with a thorough analysis of the priority themes of CSW60, as well as a set of recommendations for governments, intergovernmental organizations, civil society actors as well as other institutions and stakeholders. Such agreed conclusions would be guaranteed to be anchored in young people’s interests acting in their own authority and ensuring their meaningful participation in influencing the implementation of the SDGs.

I thank His Excellency Ambassador Patriota for being at this closing ceremony and receiving the “youth-agreed conclusions” from the hands of a youth and gender equality advocate.

I would also like to take the opportunity on behalf of UN Women and the Inter-agency Network would like to thank all the members of the Youth CSW Taskforce.

I would like for all the members of the drafting committee to stand up, who have spent long nights, to create this much-awaited Declaration of the CSW Youth Forum.

I would also like to thank my civil society colleagues Houry, Beth and Victoria for making the Salvation Army available on day one.

Last but not least, I really need to thank my Senior Adviser, Ravi Karkara and his team: Ines, Dean, Rohit, Mariko, Allison and Saket.

The Youth CSW Forum has been a historic opportunity for young women and young men to come together to amplify their common concerns and advocacy efforts in advance of the commencement of the CSW official session. For the first time, “youth agreed conclusions” have been constituted, outlining a thorough analysis of the priority theme of CSW60.

The Forum has fostered collaboration and strategic networking among youth to strengthen their voices and leadership in the women’s movement and takes into account their diverse voices to highlight intersectional challenges and opportunities.

It is very important to follow through after CSW and expand CSW beyond the two weeks in New York—the implementation of these “youth-agreed conclusions.”

I encourage all of you to use CSW60 as a forum to link the agendas and accountability mechanisms of the SDGs to other commitments and agendas, such as peace and security, climate justice, migration— without ever losing focus on the Beijing Platform for Action.

Young women and young men must take a centre seat in achieving a planet that is equal and just. You, the youth—filled with capability—must be the drivers of change to achieve Planet 50-50 by 2030! I ask you to leave today with knowledge, tools and partnerships, and lead the change in your community that will create a society that is truly equal!