Acclaimed soprano Renée Fleming to perform; momentum for Stepping It Up for Gender Equality rises

(New York, 7 March) — International Women’s Day celebrations on 8 March will mobilize people around the world to call for a Planet 50-50 by 2030. UN Women is organizing a series of diverse, high-profile events in over 40 countries, where ordinary citizens, activists, musicians, athletes, students, security personnel, scholars and stock exchange officials will be among those who commit to “Stepping It Up for Gender Equality.”

At the United Nations Headquarters in New York, prominent speakers from governments, the United Nations, businesses and civil society, including youth groups, will convene to debate how to advance women’s empowerment and overcome barriers to change. UN Women Executive Director Phumzile Mlambo-Ngcuka and Pamela Falk of CBS News will moderate the session. Celebrated soprano Renée Fleming, one of the most acclaimed singers of our times, will perform at the high-powered event, along with young artist Tennille Amor and Broadway singers.

Key to the discussion will be the essential role of gender equality in attaining the recently agreed Sustainable Development Goals, a blueprint for global development endorsed by all UN Member States. The event will further highlight the importance of equal representation of women at all levels of the UN system, and the integration of gender issues in all aspects of the UN’s work.

“Women and girls are critical to finding sustainable solutions to the challenges of poverty, inequality and the recovery of the communities hardest-hit by conflicts, disasters and displacements. They are at the frontline of the outbreaks of threatening new epidemics, such as Zika virus disease or the impact of climate change,” said UN Women Executive Director Phumzile Mlambo-Ngcuka in her message for the Day. “The participation of women at all levels—and the strengthening of the women’s movement—has never been so critical, working together with boys and men, to empower nations, build stronger economies and healthier societies. It is the key to making Agenda 2030 transformational and inclusive,” she added.

UN Women Regional Ambassador and actor-director-singer from India Farhan Akhtar will release his powerful song “We all are on the Goodside” on 8 March. The song, produced by his organization Men Against Rape and Discrimination (MARD), advocates for women’s empowerment and celebrates an equal world for all.

Around the world to mark International Women’s Day, 35 stock exchanges will ring their opening or closing bells to raise awareness. In Santiago, 800 private sector and government leaders will gather to show support. The Dhaka exchange will highlight the low share of women in board positions among listed companies and announce a survey to inform steps to boost participation. A half-day session at the Nairobi exchange will profile best practices by companies to empower women, while speakers in Amman will stress how gender diversity improves corporate performance.

Based on a partnership agreement signed on the occasion of the day, in Nigeria, UN Women will join MasterCard, the National Identity Management Commission and civil society organizations to kick off a new programme that aims to ensure at least 500,000 women obtain national identity cards that enable access to financial services, including electronic payments—a foundation for economic empowerment.

The Sorgente Group of America, a real estate company that specializes in historic and sustainable buildings, will highlight the message of “Planet 50-50: Step It Up for Gender Equality” on its iconic Flatiron building, to mark International Women’s Day on 8 March.

In association with UN Women, Snapchat, the popular mobile story-telling app, will feature remarkable women from all walks of life in a format called ‘Live Story’, which will be shared with Snapchatters on 8 March. Users who watch the story in their app will have the chance to contribute their own Snaps, telling their stories and honouring the remarkable women in their lives.

Commemorating International Women’s Day in New York and New Delhi, the United Nations Postal Administration and India Post will jointly issue stamps, designed by Mirko Illic, which illustrate gender equality by showing half a face—either male or female. The message: men and women have to work together to make gender equality a reality. The initiative is part of UN Women’s HeForShe global solidarity movement to engage men and boys as agents of change for women’s rights and gender equality.

In every region of the world, people will organize marches, competitions, performances and other events. Thousands will run, walk, march or cycle to demonstrate their commitment to a gender-equal world, such as through cycle rallies in India and the Maldives. Women’s and men’s hockey teams will square off in a match in Tanzania.

The arts will feature prominently, with Haiti hosting a concert and photo exhibit, the State of Palestine a series of performances, and Albania a photo competition. Film festivals will take place in Barbados, Cambodia, the former Yugoslav Republic of Macedonia, Georgia, Jordan and Moldova. In Jordan, HeForShe volunteers will unveil an art collage.

A public gathering in Mali will give awards to women pioneers and emerging leaders. Pakistan will launch an award ceremony for women’s rights activists, the first in an annual series. In Brazil, women will run to “Step It Up” for the HeForShe campaign, and a special ceremony will recognize companies with best practices in terms of gender equality and women’s empowerment.

Viet Nam plans a university event on gender stereotypes, and Thailand a series of feminist dialogues. In Bosnia and Herzegovina, a competition for journalists will be initiated, encouraging them to focus attention on gender equality issues.

In the lead-up to International Women’s Day, on 7 March, a new series of orange dresses, scarves and ties will be launched at the National Portrait Gallery in London. The vibrant colour signifies hope and positive momentum in the global movement to end violence against women; proceeds from sales will benefit the UN Trust Fund to End Violence against Women (UN Trust Fund). Fashion designers Daniella Helayel and Ozwald Boateng created the items through a partnership with LDNY. Models and celebrities such as Lily Donaldson, Olivia Grant, Jodie Kidd and Caroline Weinberg will attend the launch, followed by a pop-up store at Goldman Sachs in London.

Also on 8 March, during an event on the role of ethical fashion in preventing violence against women and girls, at the London boutique Celestine Eleven, VOZ (meaning ‘voice’) will unveil a Manta (blanket) to benefit the UN Trust Fund. The Manta was designed and produced by rural women artisans in Chile, providing employment and training. 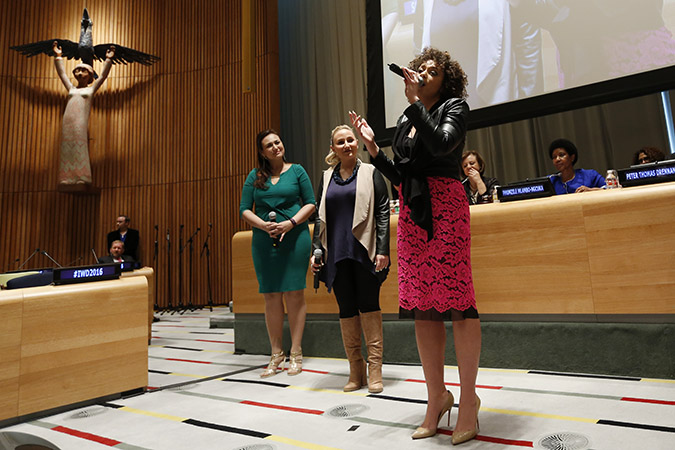