From where I stand: Abby Wambach 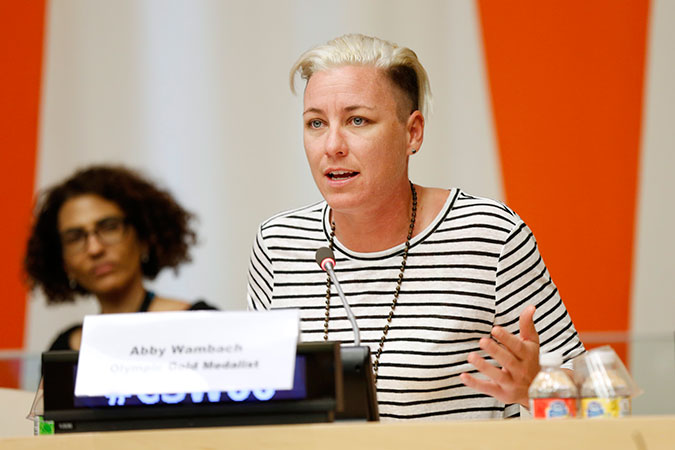 If you think you're treated unfairly, don't wait for the fear of rocking the boat; rock the boat.

Sometimes when you're inside, you can't see that you're being treated less than someone else. You're grateful. You think, wow, I'm here. I have a seat at the table!

Once I retired, I looked across the table and realized that I scored more goals than any man, but got paid so much less. Many women professional athletes have to get another job when they retire. I thought wow, I should have said more. I should have stepped up more.

Football is meant to be played on natural grass, not artificial turf. You are more prone to injury on artificial turf; you have to be more careful and cannot take as many chances on the faster surface. FIFA didn’t put natural grass in the stadiums during the 2015 Women’s World Cup and we deserved better.

FIFA paid us women 17-18 times less than what they paid the winner of the men's world cup championship in 2014.

It’s not only the pay gap, there's also opportunity gap, and just being seen as an equal is a challenge. When you open the sport section of almost any newspaper or website, you see men playing sport. My call for action is to the media: write more stories on women’s sport, make sure women are visible!”

Abby Wambach, a sports icon and two-time Olympic Gold Medalist and FIFA Women’s World Cup Champion, spoke out against pay inequality at UN Women’s High-Level Event on Gender Equality and Global Call to Action on Equal Pay at the 60th session of the UN Commission on the Status of Women on 16 March in New York. Her story links directly to Sustainable Development Goal 5 on promoting gender equality and women’s empowerment, as well as Sustainable Development Goal 8 on promoting inclusive and sustainable economic growth, full and productive employment and decent work for all women and men, including equal pay for work of equal value.