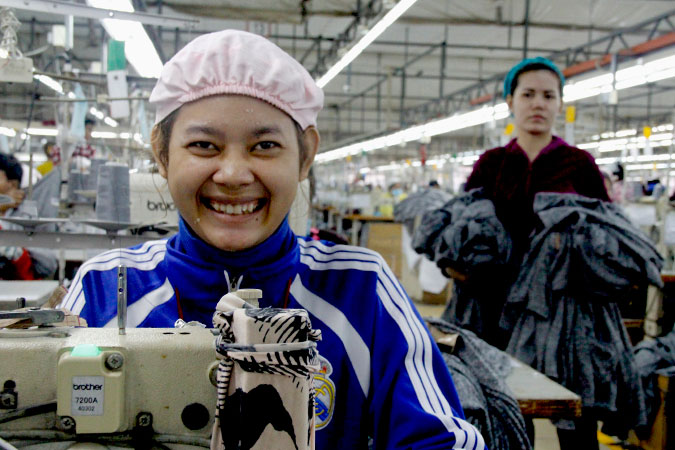 The men at the factory would stare at me and tell me that I was old enough ‘to be eaten. I was the newcomer. Walking the small distance from my sewing machine to the toilet used to be very uncomfortable.’ New women coming to work at the factory often experienced harassment. I felt so angry. I wanted to tell them that their behaviour was wrong. But if I did, worse things could happen.

The project on sexual harassment gave me courage to take a stand against this violence. My co-workers and I wrote a song about what it really meant for us to feel safe from violence. The song was filmed and made into a music video. We have performed it during the 16 Days of Activism Campaign and at events organized by CARE to raise awareness in our communities.

Now things have changed a lot. We have a sexual harassment campaign in the factory, and a workplace policy that lets everyone know that sexual harassment is not acceptable and if people report it, it will be taken seriously. I can take breaks without feeling nervous. I feel safe and happy.”

Yoeurn Reaksa, 20, is from a rural district in Cambodia. She moved to the capital city, Phnom Penh, a year ago to work in a garment factory. There, CARE Cambodia is addressing sexual harassment and gender-based violence with support from the UN Trust Fund to End Violence against Women, which is managed by UN Women on behalf of the UN System. The project works directly with factories to develop workplace sexual harassment policies and organize activities with workers. These efforts contribute towards Sustainable Development Goal 8, on promoting decent work for all, including targets to protect labour rights and promote safe and secure working environments for all workers, and Sustainable Development Goal 5 on promoting gender equality, including targets to end and prevent all forms of violence against women and girls.

Related News
14/01/2019
A fresh look and a fresh start for survivors of human trafficking in Cambodia
03/03/2017
From where I stand: “I had minimized my interactions with men since I was eighteen to avoid rape”
24/02/2017
From where I stand: “Some demand sex before awarding a contract”
14/04/2015
Women vendors improve markets in Papua New Guinea
02/10/2013
Towards safer work and migration for women
END_OF_DOCUMENT_TOKEN_TO_BE_REPLACED