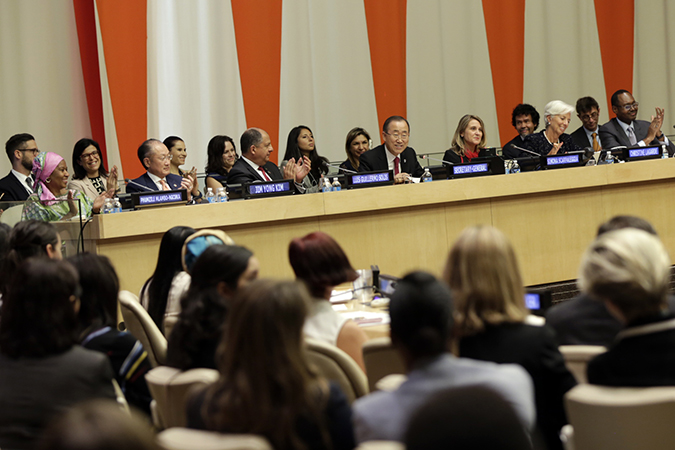 New York—The High-Level Panel (HLP) for Women’s Economic Empowerment today presents its first findings to the UN Secretary-General at an event in New York, held in the context of the UN General Assembly. The HLP, created by UN Secretary-General Ban Ki-moon in January 2016, aims at placing women’s economic empowerment at the top of the global agenda to accelerate progress under the 2030 Agenda for Sustainable Development.

The report aims to draw attention to the challenges faced by the most disadvantaged women, to bring informal work from the margins to the mainstream, to highlight how discriminatory laws limit choice and to shed light on the centrality of unpaid work and care, which is one of the most pervasive and significant barriers to women’s economic empowerment.

“The launch of this first report, which has been enriched by passionate and vigorous debates, represents a major milestone for the work of the HLP. It has drawn on the substantial and robust evidence about key issues, identified the fundamental drivers and principles and delivered a call to action,” said Luis Guillermo Solis Rivera, President of Costa Rica and Co-Chair of the HLP.

“Something all panel members agree upon is that economic empowerment is about rights, justice and creating a movement that will leave no woman behind. This report provides the added value of concreteness by showing good examples on how society can come together to accelerate women’s economic empowerment. After all, if we do not act, we are missing out on huge gains for global sustainable development and economic growth”, added Simona Scarpaleggia, CEO of IKEA Switzerland and Co-Chair of the HLP.

The HLP brings together a diverse group of stakeholders including governments, private sector, trade unions, commercial banks, civil society organizations and multilateral organizations, such as UN Women, all of which are crucial to building greater economic empowerment and realizing rights for women.

“Closing the pay gap between women and men and finding solutions to the unpaid work done by millions of women and girls will have a huge impact on women’s ability to shape change in their live— especially the poorest. With money in their pocket and increased control over their own time and resources, women can make decisions about how to make life safer and better for themselves and their children, whether that is completed education or further skills training, health care, including their sexual and reproductive health, or simply better food for the family. This is the time, for us, and for the world, to put gender equality and women’s empowerment at the centre of the changes to which we all aspire, and make a real impact on poverty,” said Phumzile Mlambo-Ngcuka, Executive Director of UN Women.

Research shows that women invest their income back into their families and communities, including in health and education. McKinsey Global Institute estimates that if women in every country were to play an identical role to men in markets, as much as $28 trillion would be added to the global economy by 2025.

Complete version of the Interim report will be available online at: www.womenseconomicempowerment.org.