Placing Pacific women at the forefront of disaster planning and response

As the Pacific braces itself for another cyclone season, UN Women is leading efforts to ensure that women and girls are at the centre of disaster preparedness, response and recovery work. 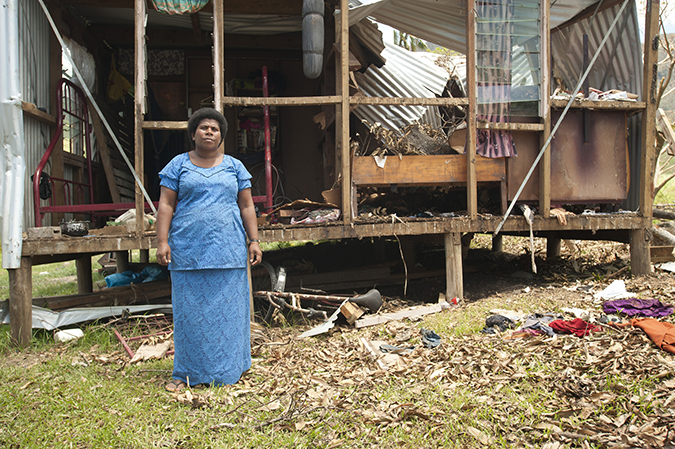 Salote Tubuna outside one of her two small houses in Buka Settlement just outside of Rakiraki. Photo: UN Women/Murray Lloyd

“We were at home on the night of the cyclone, the wind was too strong…it ripped our house apart and we ran. While we were hiding in another house, a tree fell and ripped the roof open...We ran again and found shelter in our neighbour’s house,” recalls Salote Tubuna, a Fiji Rakiraki market vendor and farmer. Before the night was over, her neighbour’s house was damaged by Tropical Cyclone Winston and the family took cover under a bed, waiting for daylight.

For the people in the Pacific, the cyclone season, which officially started in November 2016 and runs until April 2017, triggers painful memories. In the last season, three Category 4 cyclones devastated the Pacific simultaneously. Now is the time to ensure that the needs and voices of women and girls are integrated at all levels of planning on disaster preparedness, response and recovery.

“Promoting gender equality and the protection of women, girls, boys and men go hand in hand,” says Aleta Miller, UN Women’s representative at the Fiji Multi-Country Office. “It must be at the forefront of humanitarian planning and response, otherwise we are failing the people of the Pacific."

UN Women’s Fiji Multi-Country Office provides leadership to the Pacific Humanitarian Protection Cluster, a regional mechanism that works on enhancing regional and national capacity for gender and protection-sensitive disaster preparedness, response and recovery in Pacific Island Countries. By bringing together UN agencies, regional and international organizations with local authorities to identify and fulfill the needs of impacted communities, the Pacific Humanitarian Protection Cluster aims to integrate gender and protection concerns into humanitarian response. 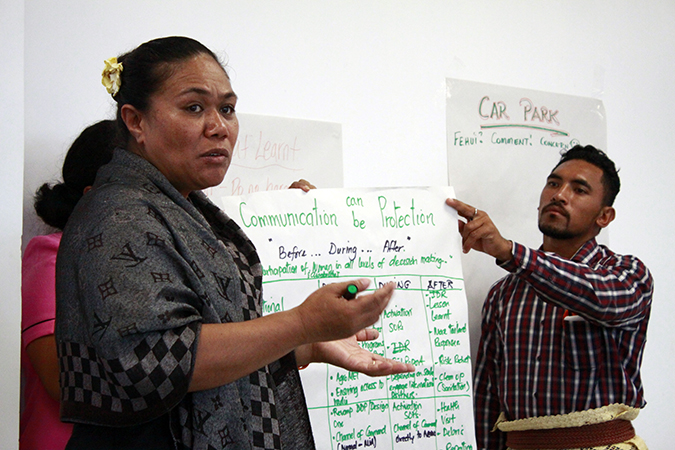 For example, in August 2016, UN Women organized and delivered the Pacific Regional Gender and Protection in Humanitarian Action training in partnership with the Gender Standby Capacity Project, managed by the Norwegian Refugee Council. The training brought together government agencies, international and national organizations providing services and humanitarian assistance from Fiji, Samoa, Tonga, Vanuatu and the Solomon Islands to discuss how women in all their diversity need to be part of all stages of emergency management. Since then, the participants have worked with UN Women to facilitate national trainings in their own countries, which have given further impetus for integrating gender and protection into all aspects of disaster planning and response mechanisms in their countries.

“Women are the first responders and a vital resource. You cannot do much without the wealth of knowledge that they have in the response, recovery and further development,” says Rothina Noka, the Gender and Protection Coordinator in the Vanuatu Government’s Department of Women’s Affairs. Rothina herself witnessed that when women were in leadership roles on Vanuatu’s community disaster committees and part of decision-making, the needs of women, children and people with disabilities were more likely to be considered and met.

“We especially need to build the capacity of women so that when disaster strikes women can easily respond; they can be ready,” adds Solomon Islands’ Under Secretary for Ministry of Women, Youth, Children and Family Affairs, Hugo Hebala. 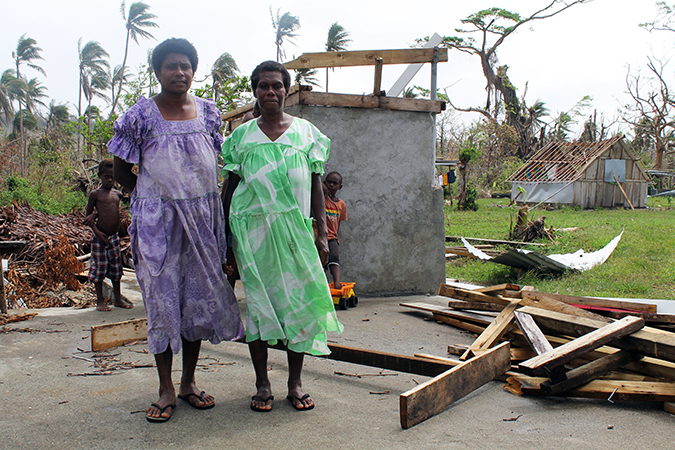 Women stand on the foundation of their home after it was destroyed by Tropical Cyclone Pam, Vanuatu, 2015. Photo: UN Women/Ellie van Baaren

The initiative has vital implications in the Pacific, where persisting gender inequalities often lead to additional vulnerabilities and different impacts for women and girls when disasters strike. The same inequalities can also shut out women’s voices from decision-making processes that shape disaster preparedness, response and rebuilding efforts, and in some cases even restrict their mobility. For example, in the aftermath of Tropical Cyclone Pam, which devastated Vanuatu in March 2015, some women were discouraged from going to the evacuation centres by men, and widows and people with disabilities were forgotten in the distribution of food.

The Pacific Humanitarian Protection Cluster is taking steps towards ensuring that integrating gender and protection needs is the norm, rather than an option or afterthought.

Related News
10/06/2020
Across the Pacific, crisis centres respond to COVID-19 amid natural disasters
14/08/2019
Take five: “Addressing gender and protection issues in humanitarian action is lifesaving and planning and budgeting needs to reflect that”
12/10/2016
Preparing for disasters, rebuilding in the aftermath
24/02/2016
Fiji cyclone appeal: Help keep women and girls safe and support rebuilding efforts
23/08/2018
Women at the helm of cyclone recovery efforts in Tonga
END_OF_DOCUMENT_TOKEN_TO_BE_REPLACED