From where I stand: “Ending violence against women and girls is hard work, but it’s not impossible“

At 16 years of age, David Kovačić is a gender equality activist from Bosnia and Herzegovina. As an active member of the Be a Man club, a youth initiative that's spreading across the country, he believes that real men are not violent, and encouraging his peers to take a stand against gender-based violence. 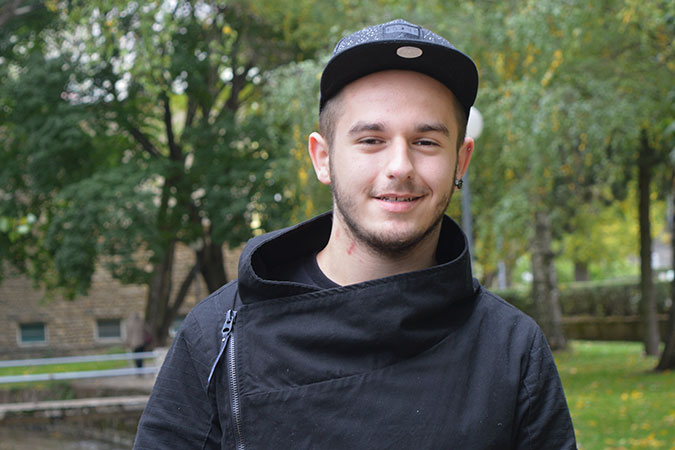 Earlier this year my sister told me about the ‘Be a Man’ clubs, which are being established throughout Bosnia and Herzegovina. I was intrigued because I wanted a peaceful and equal community, but gender equality was not the norm around us. I thought that through the clubs we can do something about that; young people can get together in a safe space to talk about gender, relationships, sexual and mental health issues—things that they do not teach us in schools. After attending summer camp in Mostar and Sarajevo, I decided to form a ‘Be a Man’ club in my hometown, Livno.

I have learned a lot about stereotypes and prejudices—for example, I used to think that there are male and female jobs. Now I realize that anyone can do whatever they want to do, and that the house work should be equally divided.

There are eight boys and three girls in the club now and we meet every week. We discuss many different things, including violence against women and girls. We have all witnessed harassment, cyber bullying and other forms of violence.

In my opinion, one of the root causes of inequality between men and women is that we are raised to think that men are superior and stronger; that to be a man, you need to show your physical strength. This mindset often leads to violence

Nowadays, with everybody using social media all the time, cyber violence is a big concern among young people. We are planning to have some workshops on that, and internet safety.

Many of my peers do not understand what gender equality means. We don’t learn about it in schools, we don’t talk about stereotypes, but I believe we should. If we had classes and school discussions on this topic, many boys would change their attitudes and behaviour.

In the ‘Be a Man’ club, I have learned to become a peer educator and pass on the knowledge to high school boys and girls. Ending violence against women and girls is hard work, but not impossible.”

David Kovačić, 16, lives in Livno, a city in the western part of Bosnia and Herzegovina. This year, Kovačić started a Be a Man club in his community. The clubs are part of an educational program for the prevention of violence and promotion of healthy lifestyles called “Program Y– Youth Innovative Approaches in GBV Prevention and Healthy Lifestyle Promotion for Young Men and Women“. They belong to a growing network of youth initiative across the country to promote gender equality and youth issues that is led by Association XY and Care International Balkans. UN Women supports the educational programme under its “Standards and Engagement for Ending Violence against Women and Girls and Domestic Violence” project, funded by the Swedish International Development Cooperation (Sida). Kovačić's story links to Sustainable Development Goal 5, which promotes gender equality and aims to end all forms of violence against women and girls.

Related News
09/12/2015
Fathers in Turkey foster violence-free families and gender equality
14/12/2017
In Bosnia and Herzegovina, youth harness the power of tech to combat violence against women and girls
05/10/2017
From where I stand: “Changing the present, we are also changing the future”
14/11/2016
From where I stand: Aiturgan Djoldoshbekova and Aigul Alybaeva
26/10/2016
In Albania, football and a mobile app get men to commit to gender equality
END_OF_DOCUMENT_TOKEN_TO_BE_REPLACED