In Bosnia and Herzegovina, youth harness the power of tech to combat violence against women and girls

A 48-hour Hackathon in Sarajevo brought gender and tech experts together with youth from all around the country to generate new tech solutions to combat violence against women and girls. 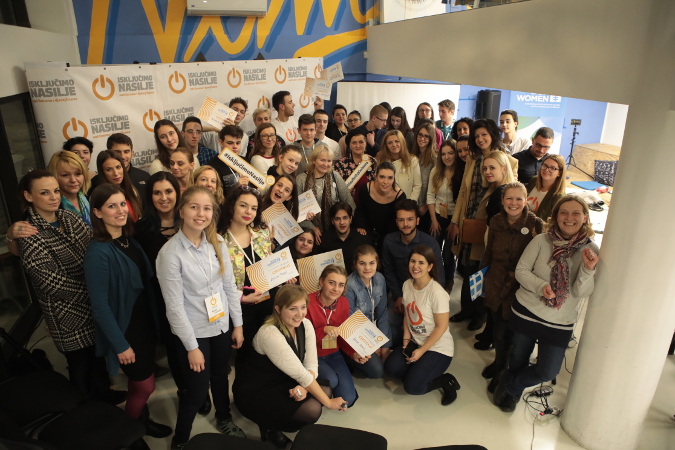 Participants of the Hackathon in Sarajevo, Bosnia and Herzegovina on 7 December. Photo: UN Women/Jasmin Brutus

Throughout 16 Days of Activism, UN Women reached out to the youth in Bosnia and Herzegovina, asking them to generate ideas for technology solutions that would help prevention of violence against women and girls.

At two ideation processes, called Ideathons, young women and men suggested 17 ideas that included tech tools such as mobile apps, web platforms, interactive chats, QR technology, wearable gadgets and mobile games that would tackle this widespread problem. The six most potent ideas were chosen to be further developed at a 48-hour Hackathon under the guidance of IT and gender equality experts.

Thirty-five young women and men of various ages from different parts of the country arrived at the capital on 7 December, excited to contribute to the Hackathon with their skills and knowledge.

Ideas included a safety map of city zones that helps users make informed choices about their movement based on an area's safety score, a bracelet that allows the wearer to send his or her location to an emergency contact if they feel unsafe, a quiz that familiarizes the user about various forms of violence and how to recognize the signs of abuse and where to seek help; an electronic matrix to report peer violence in high schools, a mobile application to support online counselling through real time chat and a web platform for reporting sexual harassment through social media.

The apps were judged based on impact, quality of the product, sustainability, and presentation.